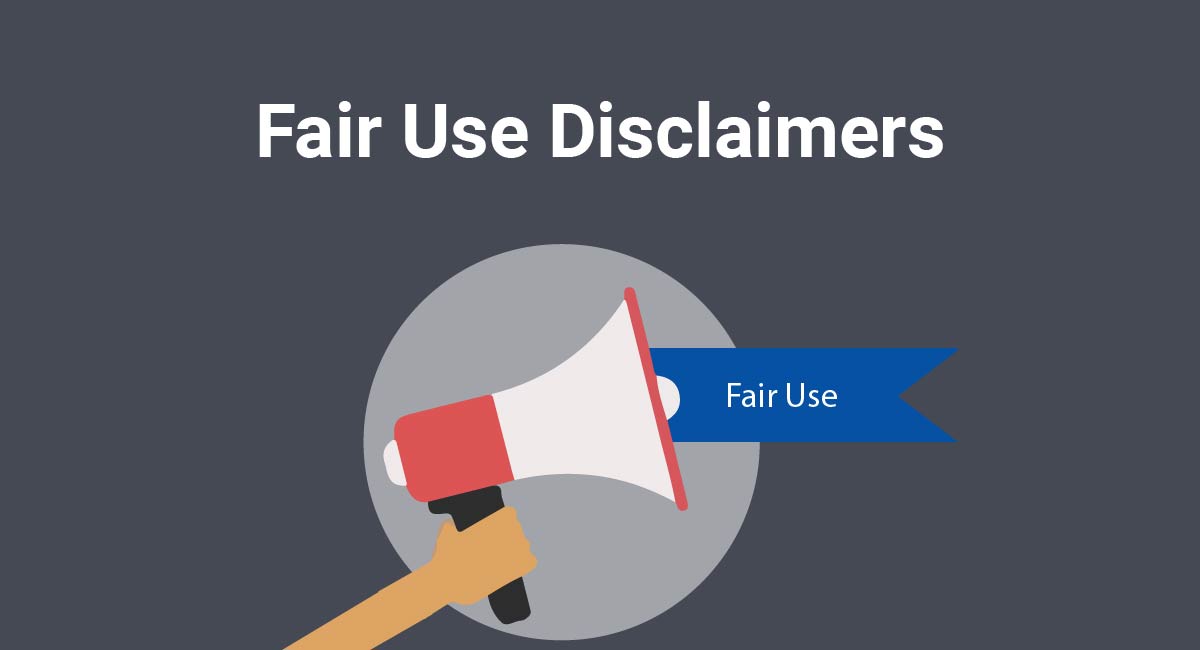 Are you sharing someone else's work online? Do you know if it qualifies for 'fair use' under copyright law?

A Fair Use Disclaimer shows that you know you've borrowed material from a different source and that you're abiding by fair use laws. While it won't protect you if you're in obvious violation of the law, it can allow you to legally share all the great content you want with your audience.

Not sure what a Fair Use Disclaimer is or how it protects your business? Keep reading for everything you need to know about disclaimers, fair use and examples of these critical parts of your website.


What's a Fair Use Disclaimer?

A Fair Use Disclaimer is a statement letting people know when you're engaging in a practice known as "Fair Use."

TermsFeed Generators make it easy for you to generate the necessary legal agreements for your websites and apps:

Simply put, a Fair Use Disclaimer says that your site or material includes copyrighted materials that you may not have the license to use.

Here's an example of a very standard Fair Use Notice from Columbia College Chicago (Note that "Notice" and "Disclaimer" are often used interchangeably): 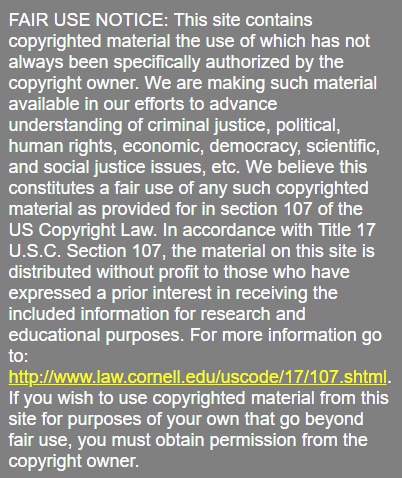 The details of what's in this notice/disclaimer will make more sense as we get more into the topic in the following sections of this article.

What is Fair Use?

Fair use is part of the wider set of US copyright laws.

It says that using copyrighted material can be done without seeking rights to the work when you're doing things like:

According to Stanford University, most fair use falls into two categories: Commentary and criticism, and parody.

Because you're not using the work as your own but rather are sharing the author's original work with your own comments, you might be using it for a "transformative purpose."

If the idea of "transformative" use of someone else's copyrighted work sounds vague, it's because it can be.

Fair Use and the Law

The entirety of the fair use clause in U.S. Copyright law can be found in US Code 17 107 - Limitations on exclusive rights: Fair use.

Fair use is centered on four statutory factors as well as the "transformativeness" of the use of the work. Let's take a look at these factors.

Four Statutory Factors of Fair Use

According to the law, there are four factors that guide fair use:

Let's break these four factors down:

Purpose and Character of Use

Where and how you intend to use the copyrighted work is important because the law and courts favor uses that aren't designed to make money off the source.

Education, research, reporting, commentary, and criticism - those common uses listed above - are favored by fair use policies because the work is reaching a wider audience but the second user isn't profiting significantly from it.

Fair use becomes more complicated when the use becomes mixed. While educational purposes are favored, for-profit universities may not find themselves on the right side of the law when using copyrighted material without seeking permission. This is because although the material is used for teaching, the school makes a profit.

Nature of the Original

Was the original work published? Copyrighted? Listed in any way?

You're more likely to struggle with this when you're dealing with creative material: using someone's unpublished song, video, or writing without permission. Factual work is more likely to stand up in court.

How Much of the Work Was Used

Using a small amount of the work, or a sample, is more likely to be fair than taking a larger portion or the entire work.

Use is also proportional. For example, if you're writing a 3,000 word article and you use a 40-word quote from a book, the law might recognize that you're not using the quote to sell your article. It's buried deep inside the article.

Let's build on this point. Using copyrighted material under fair use is fairer when you're not relying on the source as the foundation of what you're doing. If you're borrowing the work, it will be much easier to argue it is fair use because you can still argue it is transformative rather than that you're simply repackaging the work for your own use.

Value of the Effects

Will the work you borrowed make you a significant amount of money or garner prestige or market share from the owner of the original material?

If so, you may be violating fair use.

Assessing the value of the potential effect of the work is difficult, particularly in the internet age when a borrowed work may go viral without intention or expectation.

Still, there's a simple way to look at it: Will your use of the work rob the creator of a sale? If so, you may be violating fair use.

Looking for an example of how complicated fair use can be? Look no further than the music industry.

Fair Use in the Courts

Canadian rapper Drake and his associated publishers and record labels went to court when the musician sampled a recording from 1982 made by James Oscar Smith. Smith's estate argued that Drake and his team violated fair use by failing to seek rights to the spoken-word recording added into Drake's 2013 song "Pound Cake/Paris Morton Music 2."

The issue was "whether it was a fair use to alter a recording of a rap song and place it into a hip hop song with a different message, without authorization to use the musical composition."

Drake cut up a 35-second sample of the song created by Jimmy Smith and rearranged the lyrics to alter the meaning of the original recording.

If the sample had been included in a documentary, the judge presiding over the case would have had to determine whether Drake used the song in a "transformative" manner. But because Drake used it in his song - as part of his art - the question transformed into an issue of who owned the copyright.

Drake ultimately won the lawsuit because it was clear to the court that he had transformed the piece. However, the suit was more complicated.

Drake's record company had found a copyright for the recording but had not sought rights for the composition. Yet, the composition was not registered with the copyright office. Because of the issues of ownership, neither side was awarded a summary judgment.

As you can see, both copyright law and fair use are complicated and very litigious.

If you intend to share, use, or repurpose the intellectual property - copyrighted or not - of anyone else, you need to protect yourself.

Failing to do so may result in millions of dollars in legal fees.

When and Why You Need a Fair Use Disclaimer

Any time you're borrowing any work from any medium and you're using it for a transformative reason, you need a Fair Use Disclaimer.

A Fair Use Disclaimer is not an admission of violating fair use nor does it say you're using content without permission. It protects you from the accusation of copyright infringement and demonstrates an element of responsibility about the nature of your work.

As demonstrated, fair use is complicated, and it requires us to hedge bets about how the market and the law will perceive the use of work.

Without a disclaimer, you open yourself up to accusations, cease and desist letters, and even lawsuits that could prevent you from running your business. It could even end your website.

When you include a prominently displayed disclaimer, you'll have an easier time dealing with contentious issues that aren't clear-cut. For example, if a case is close and the court can see you've clearly placed a disclaimer on your page, then it may weigh more in your favor than without the disclaimer.

However, using a disclaimer won't help you if you're use of materials is violating the fair use policy.

If you're already violating one or more of the above principles or the work clearly isn't transformative, no disclaimer will weigh in your favor.

Examples of Fair Use Disclaimers

Writing a Fair Use Disclaimer is fairly straightforward, but it should always be tailored to the kind of content you borrow and how you use it. Ideally, you'll find a way to express how this fits in with Section 107 of the US Copyright Law.

We've put together a few examples to show you how standard yet customized your Fair Use Disclaimer can be.

In its disclaimer, Mass Equality notes its non-profit mission which is friendly to fair use, and its belief that its use of material falls within the law. An external link to the law has been added for authority and to demonstrate understanding:

Mass Equality goes one step further and tells users that if they want to use the already-transformed materials in ways that may go beyond fair use, then they need copyright permission from the source - not from Mass Equality.

The clause removes further liability from the non-profit by clearly stating that it's not involved in the further dissemination of material that extends beyond the law or beyond its site.

If your business or site serves as a platform where others may routinely share material, you still need some kind of protection.

Critical Media Project has a fair use statement where it defines what fair use is and then explains how it feels it has created "a transformative use of copyrighted media" and has done so "as a way to advance research and teaching related to critical media literacy and intercultural understanding, among other salient political and social issues." 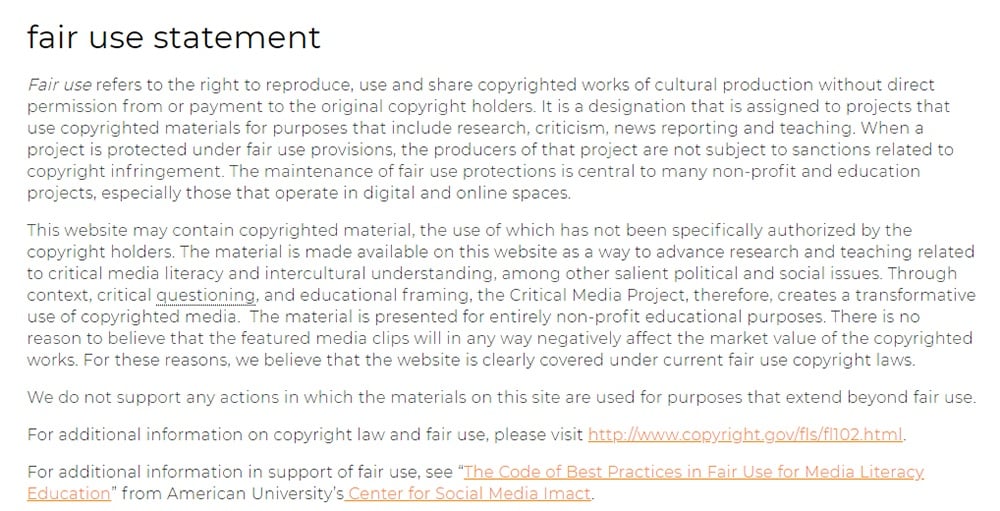 It also notes at the bottom that it doesn't support any actions that take the materials on the site and use them for purposes beyond fair use.

Compare this rather in-depth and detailed fair use statement with this shorter one from JOST that simply says the site is for "educational purposes only." 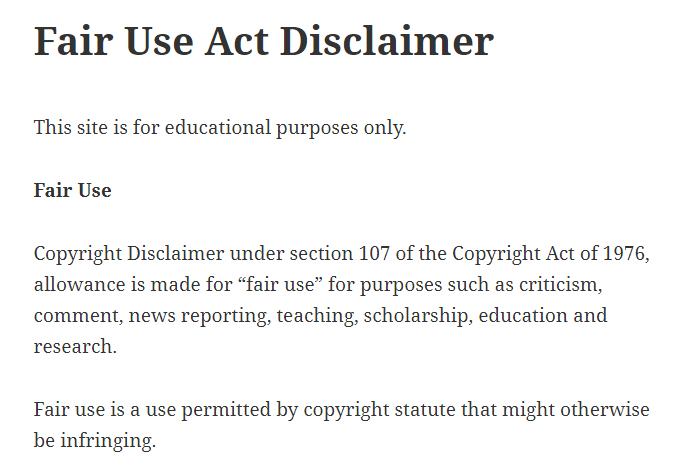 Some businesses put their Fair Use Disclaimer in with other disclaimers and legal content, such as this Fair Use and Content Disclaimer from NCECA. This combines the fair use information with disclaimers related to comments and opinions expressed: 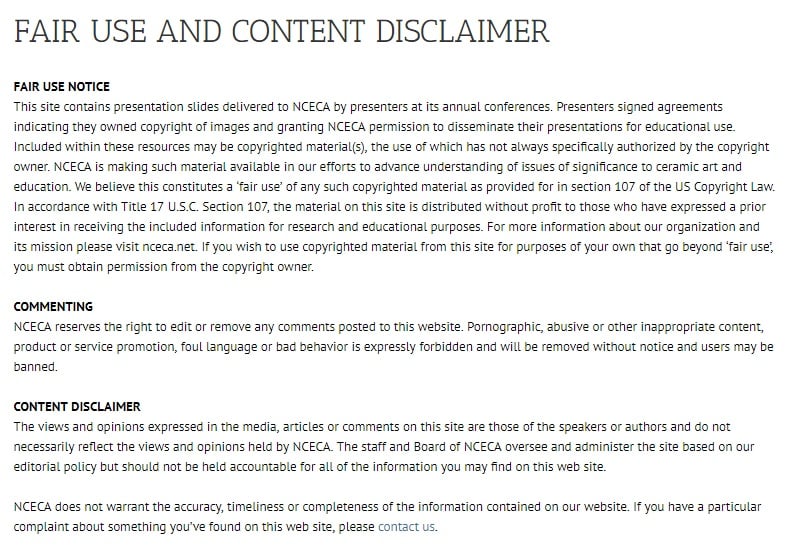 YouTube is a prime example of a site that hosts content uploaded by users who may have borrowed or sample copyrighted or previously unpublished works.

In its Fair Use Guidelines, YouTube says that different rules are applied worldwide and suggests seeking legal advice in your country if you want to upload videos:

Then, it provides guidelines regarding fair use, the four factors of fair use, and provides outbound links to more resources for their users to better understand both US law and laws in their home countries.

The fair use guidelines are brief, but they are part of the wider discussion on copyright in YouTube's legal section.

Fair Use Disclaimers inform visitors of all kinds that you're using someone else's work, but you're using it in a way that's "transformative."

You didn't repurpose or repackage it to make money off of it, so let this be known. These disclaimers show that you're honest, know the law and they can help protect you from legal action.