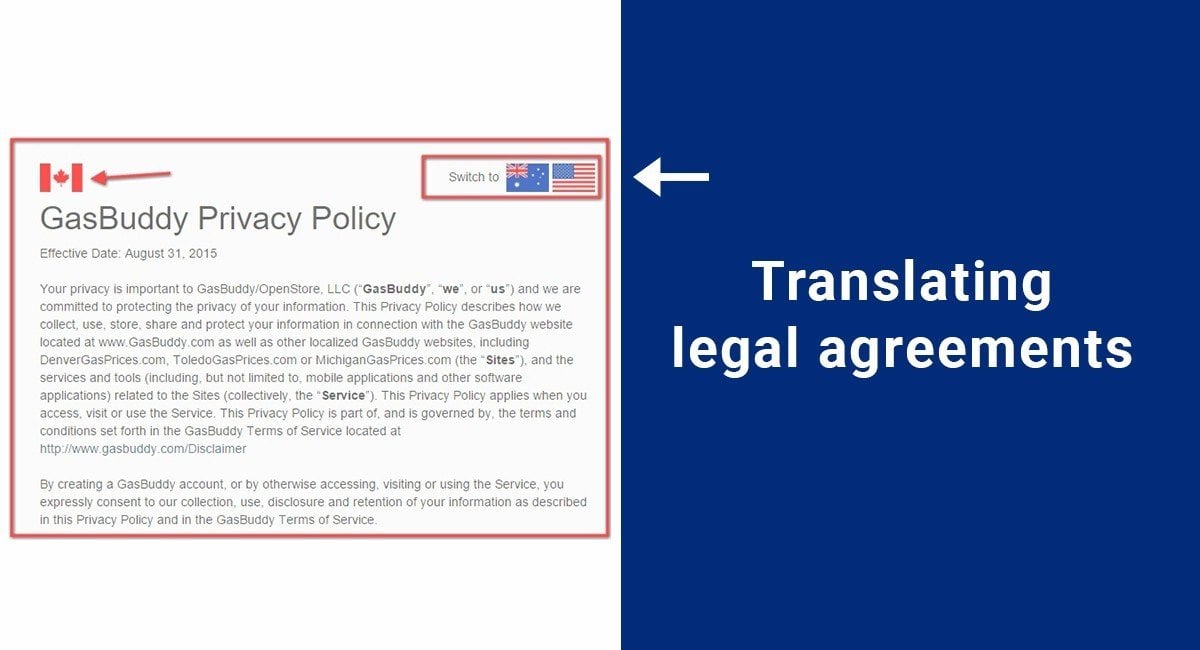 With most online businesses being easily accessible to users all over the world, issues of translation can quickly arise.

When are you legally required to provide a translation?

Laws differ by country, and can even differ from area to area within a country. Let's compare how some businesses located in either the United States or Canada handle issues of translation.

The US does not legally require any translation of website legal agreements. However, with the US being a place of such language versatility, and with the global nature of online business, many US-based websites will provide translations of their legal agreements simply for the convenience and benefit of their users, both in the US and abroad.

Within Canada, the Quebec province claims French to be its official language. English must still be used and provided according to Canadian requirements, but according to Loi 101, The Charter of the French Language, no other language can come before French with prominence and emphasis within Quebec.

This means that legal agreements for business websites in Quebec must have both a French and English translation available, and the French version must be easily accessible, if not set as the default.

Some businesses will translate the entire contents of their websites as well as their legal agreements solely for the benefit of their users.

The KickStarter is US-based, but serves a global market.

In the footer, there's an option to select a language to translate the entire site. English is set as the default, while Dutch, Spanish, and French are also available. This isn't a legal requirement, but is just something KickStarter does to help its user base interact with the website:

Amazon's Canadian website also makes it possible to easily translate the entire site, including its legal agreements (such as the Privacy Notice agreement from Amazon.ca), into French from English.

A link is placed at the top of the page, noted in the image below, that when clicked will translate the entire site into French. The link will then change to one that, when clicked, translates the site back into English: 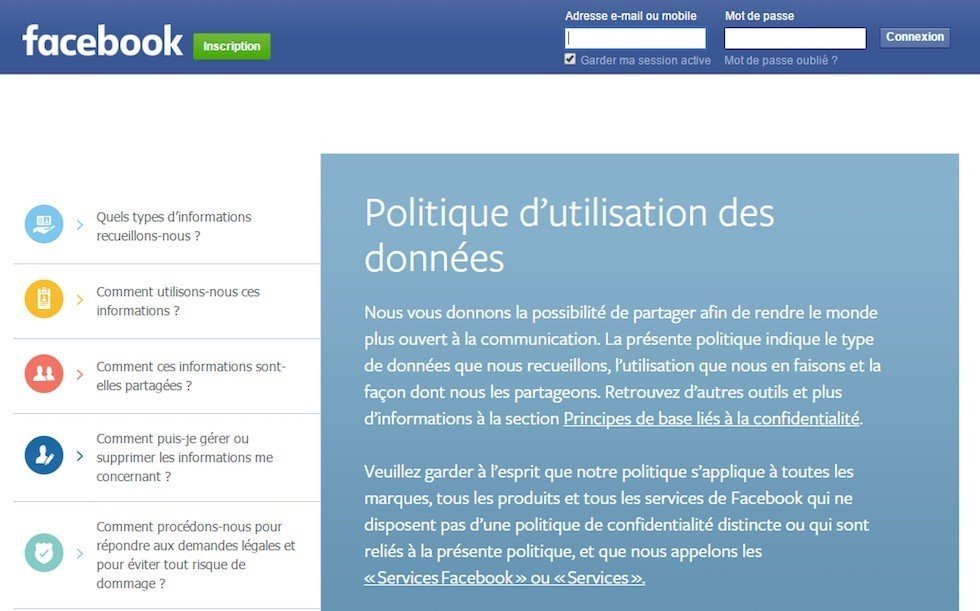 However, in the footer of the website, there are links to a number of different Facebook sites for other countries, including English. Clicking these links won't translate the current page, but rather will take you to the country-specific Facebook site:

Some websites only translate the general content into a number of different languages, but keep the legal agreements in the default, official language of where the business/website originates.

For example, Tesla Motors provides its legal information in English as a default but gives users the option to select their geographical location upon visiting the website.

Below is an image of Tesla Motors "country selector" pop-up box. Note how there are both English and French options for Canada to satisfy Canadian law that recognizes both French and English as the official languages: 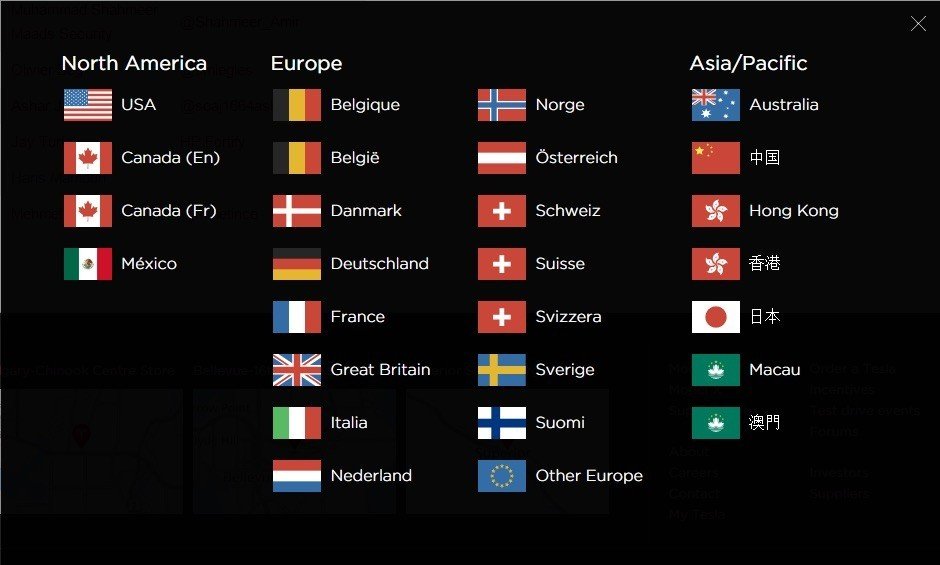 If a user picks a location, for example, Canada (Fr) for the French Canadian version, she/he will be taken to the French version of the website. 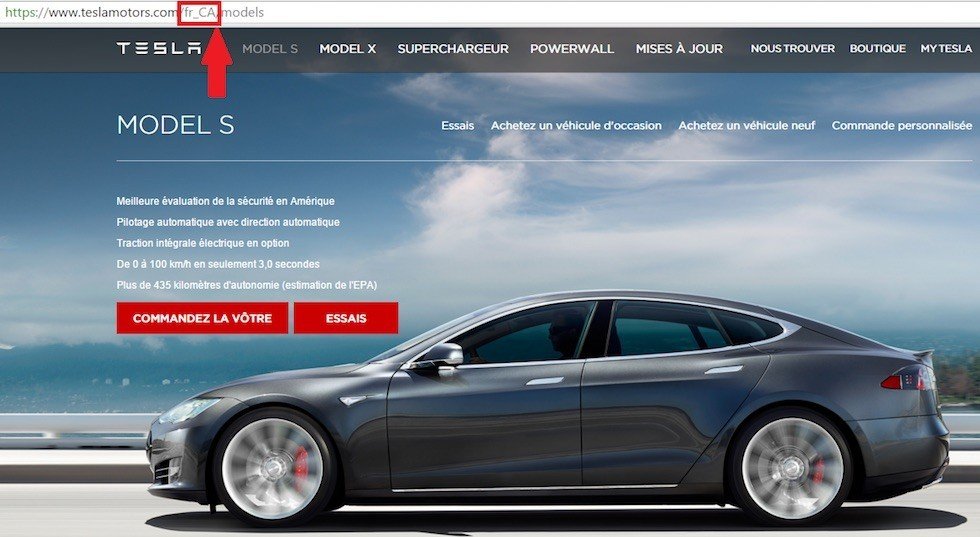 However, when a user clicks on the footer link for "Legal", even while on the French version of the website, the user will be taken to the English version of the legal terms.

The legal page is in English: 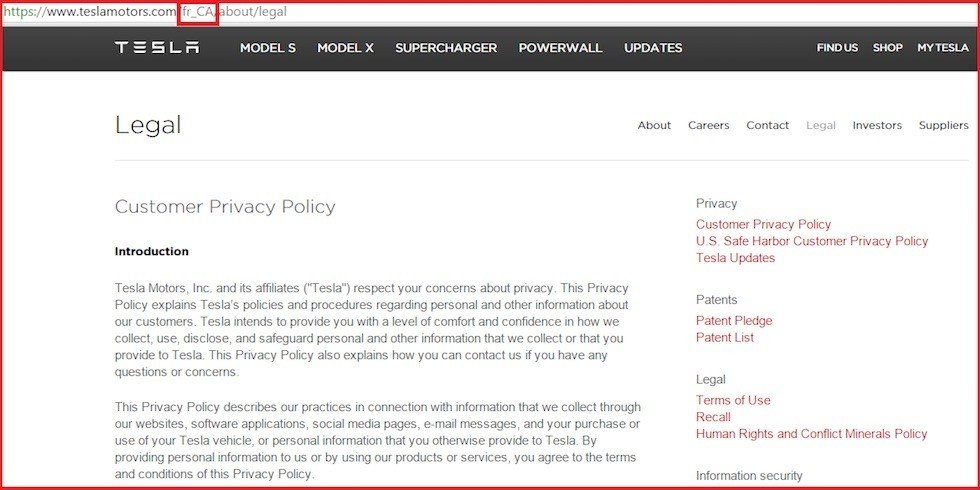 The UPS Canada website has a link at the top where you can select whether you wish to view the website and legal agreements in either French or English, in accordance with Canadian regulations:

When French is selected, the entire site, including UPS's legal agreements (such as the "Déclaration de confidentialité" page which is the "Privacy Notice" page), is translated into French: 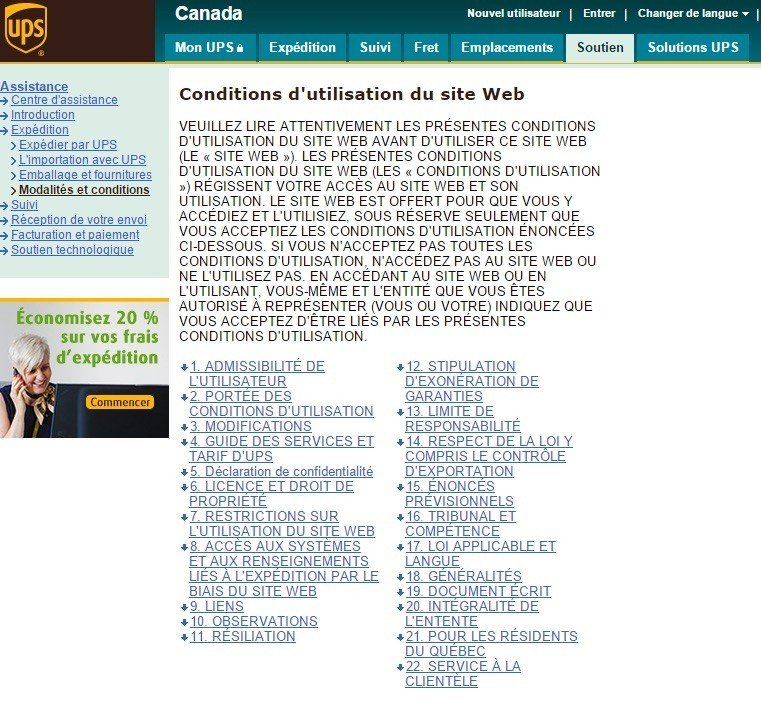 While UPS provides legal information in a number of different languages, it makes clear that English is the governing language for the terms, and that any translations have been provided for convenience, and provides instructions on how to view the actual English version:

eBay's Canadian website shows information in English by default, with a prominently-placed language selector at the top of the page. 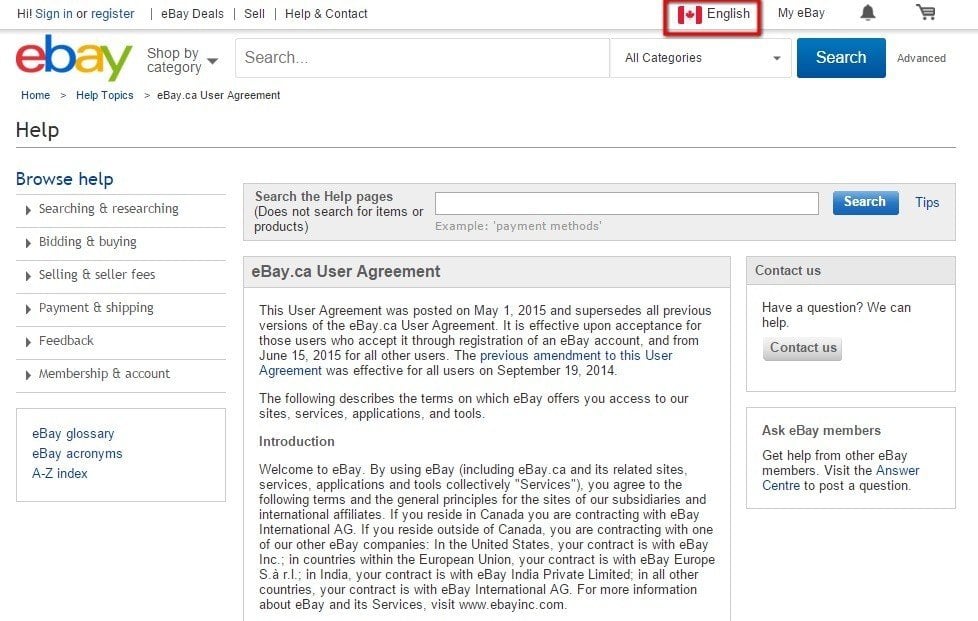 From that menu a user can select both English or French:

When a user changes the language selected from English to French, the entire website, including the legal page, change to French: 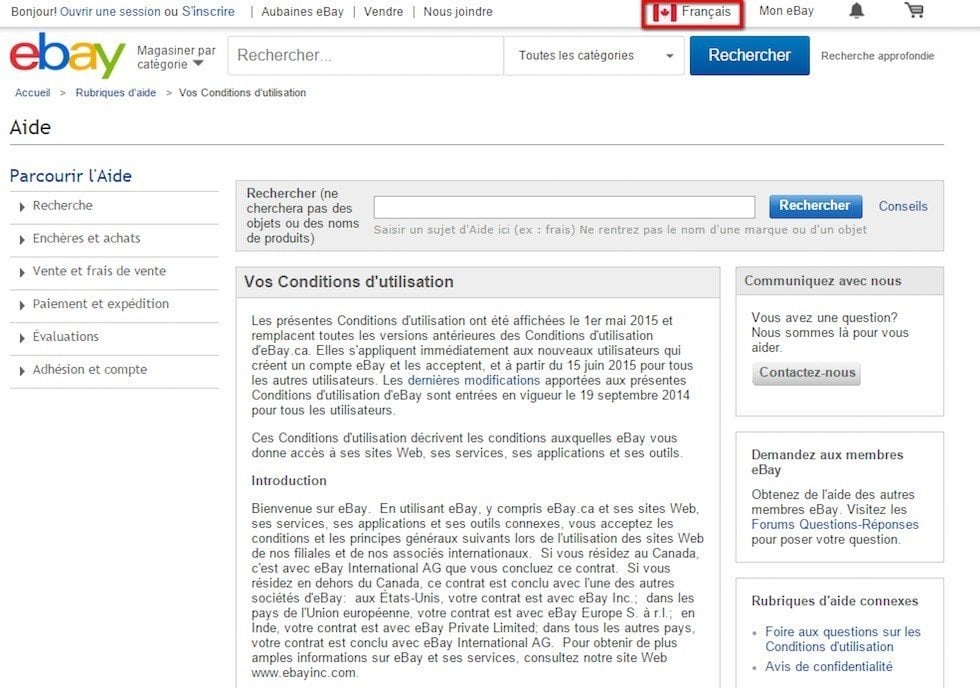 The Canadian Best Buy website is in English by default, but provides a link right at the top to switch to French. When French is selected, the entire site, including its legal agreements (such as its "Politique de confidentialité" page), translates into French: 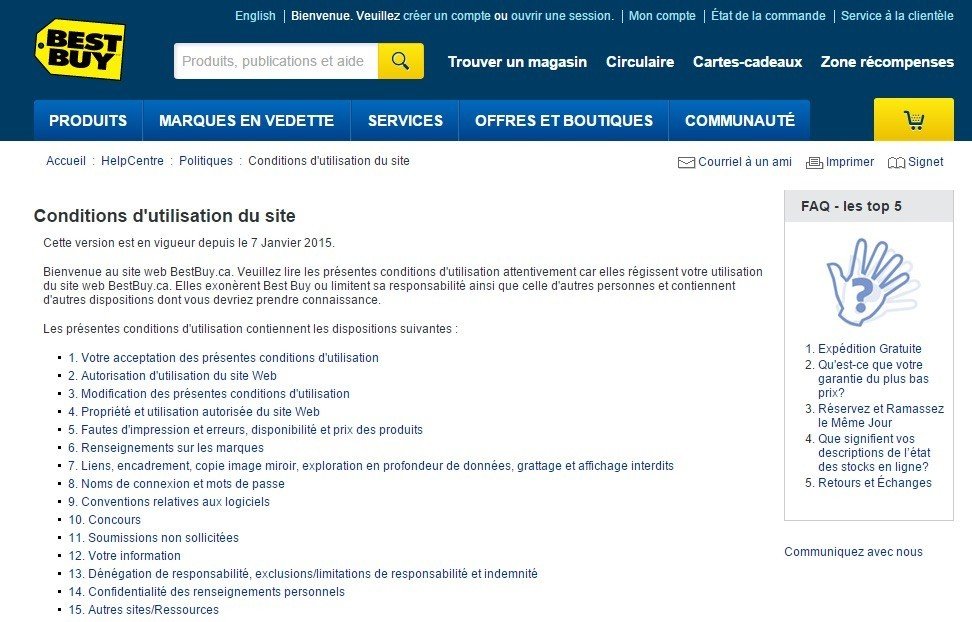 While the legal agreements, including the "Conditions of Use" page, are translated into French, there is a clause in the agreement that states:

The parties have expressly requested and required that this Agreement and all other related documents be drawn up in the English language.

This sentence is then repeated in French, just to ensure that it is clear that English is the dominant language of the legal agreements, even though they are translated into French as well.

While the language is in English, there is an option to select the Canadian version of the Privacy Policy page: 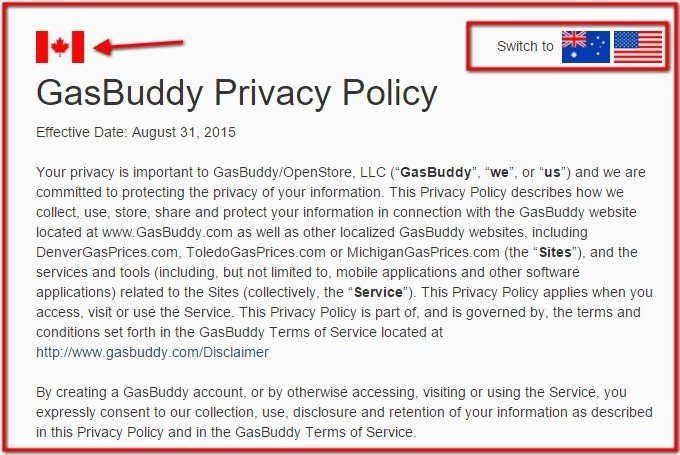 In Canada, businesses must provide both English and French versions of their website's content, including its legal agreements even if one language or the other is the governing language for the legal agreement terms.

While there is third party translating apps and programs, the global nature of online business today makes it important, in certain international industries, to provide as many different language translations as possible to reach your customer base, regardless of whether you are legally required to do so. 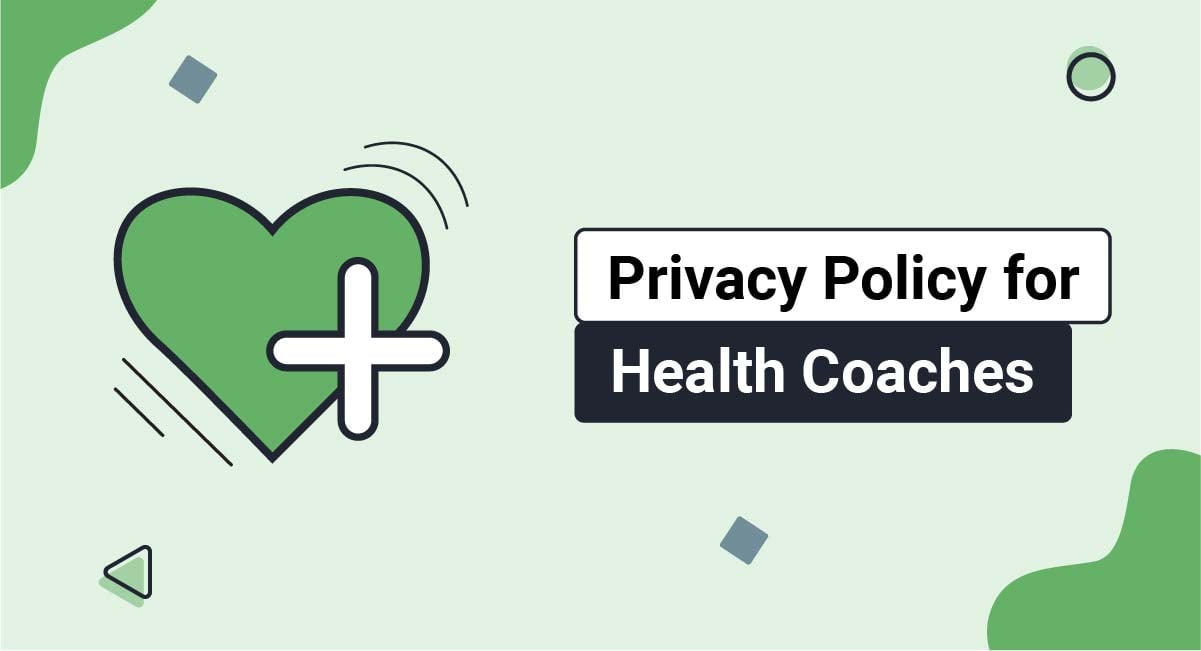 As a health coach, your mission is to help people change their habits and level up their health. To be effective at what you do, it is crucial that your clients feel that they can trust you, and building that trust often begins when users first encounter your website. Including a... 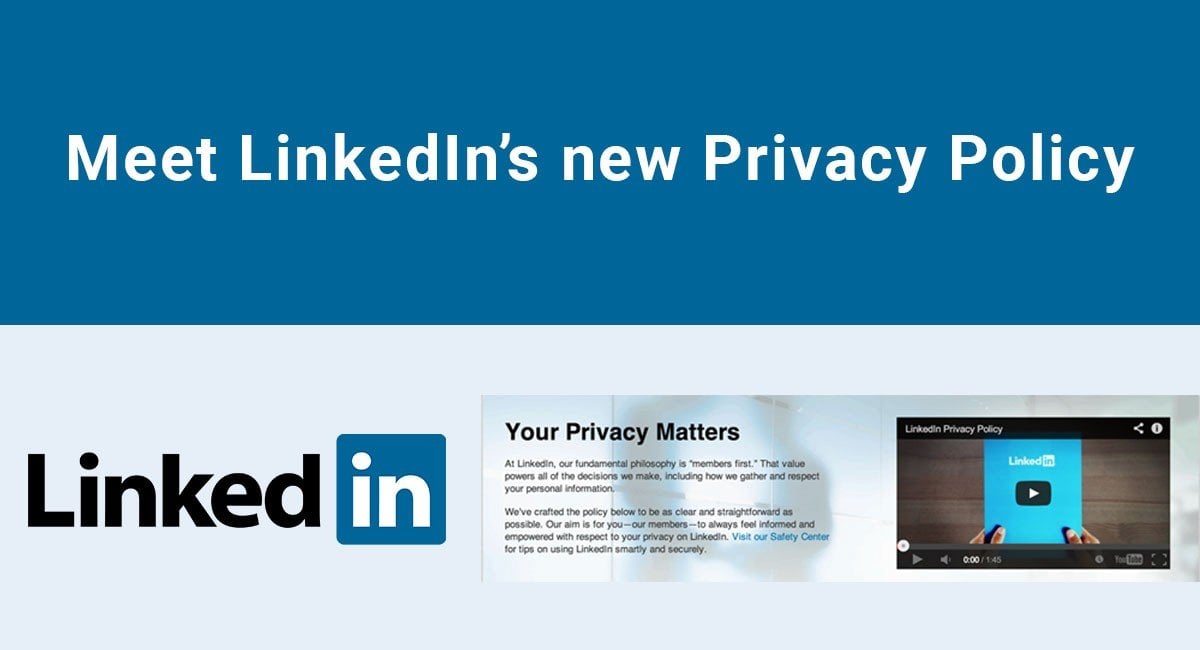 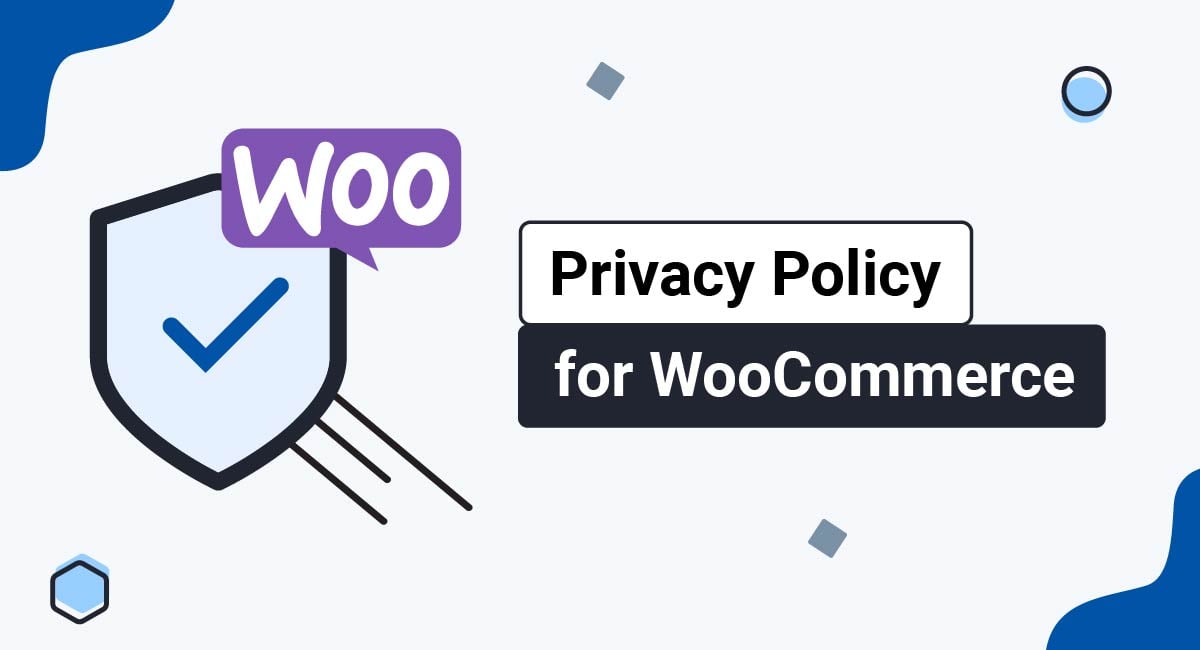 If you've recently started an ecommerce business using WooCommerce, you're going to be focused on sales, suppliers, and investment. But you have other important duties too, such as complying with privacy law. Every online business must post a Privacy Policy that lets customers know how and why they need to process...