EULA vs. Terms of Use for a Mobile App 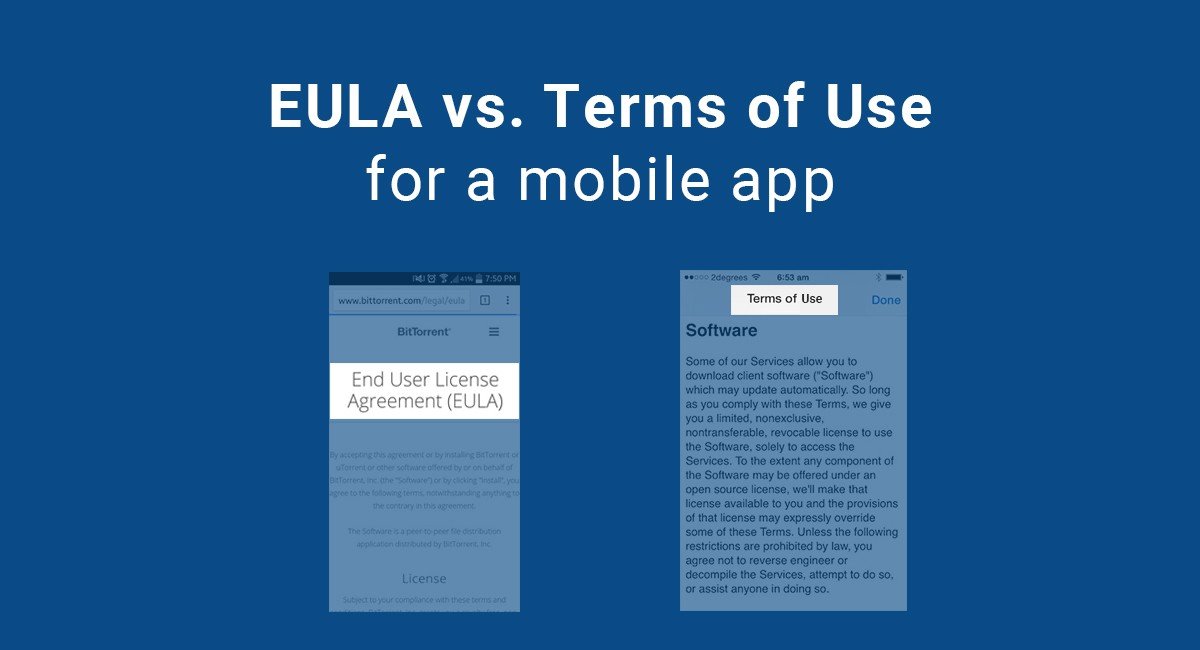 When deciding what to include in your legal agreements when setting up your mobile app, you may be wondering what's the difference between the "End-User License" agreement and the "Terms of Use" agreement.

These agreements are similar in a number of ways, but have some key legal and content differences that you should consider when setting up your mobile app.

When your user downloads, installs, and uses a copy of your app on their personal device, they're making a copy of your software, which is a copyrighted work.

The EULA relates mainly to the ability of your users to make that copy of your work and use that copy in certain ways and prohibits things such as reverse engineering and making additional copies.

It may include sections on accountability for behavior that isn't permitted, dispute resolution, and payment details such as membership fees.

Here's an example of what an EULA looks like when your users open your app:

Some of the main terms included in an EULA are:

The scope of the license is important to set out clearly what your users are allowed to do and what they can't do. 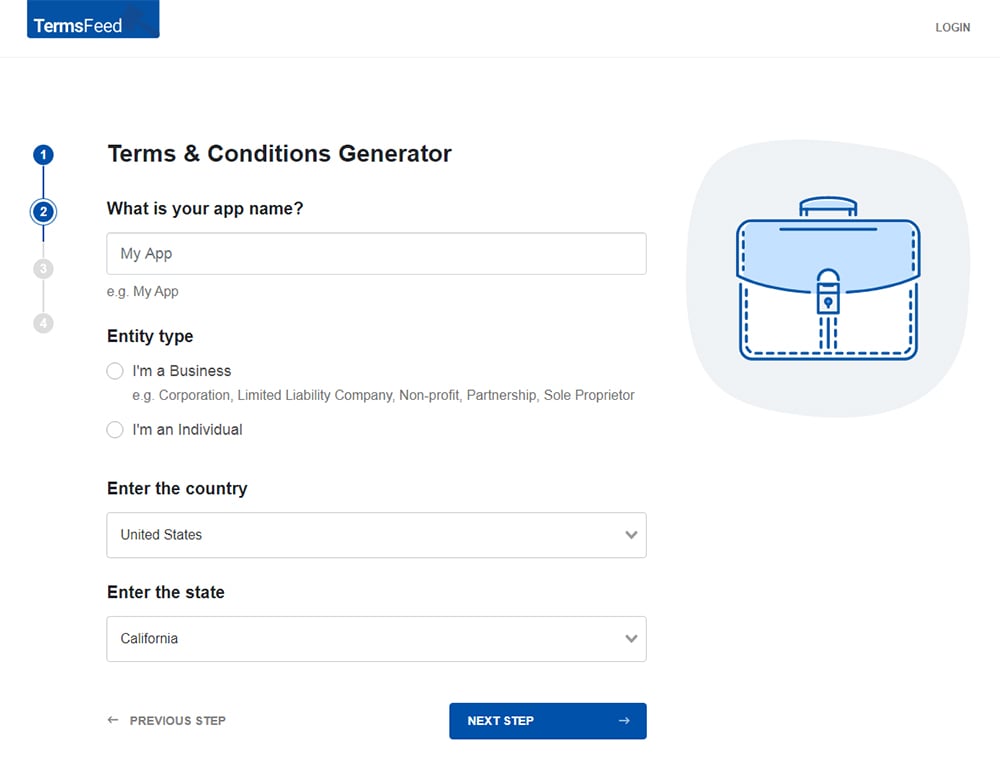 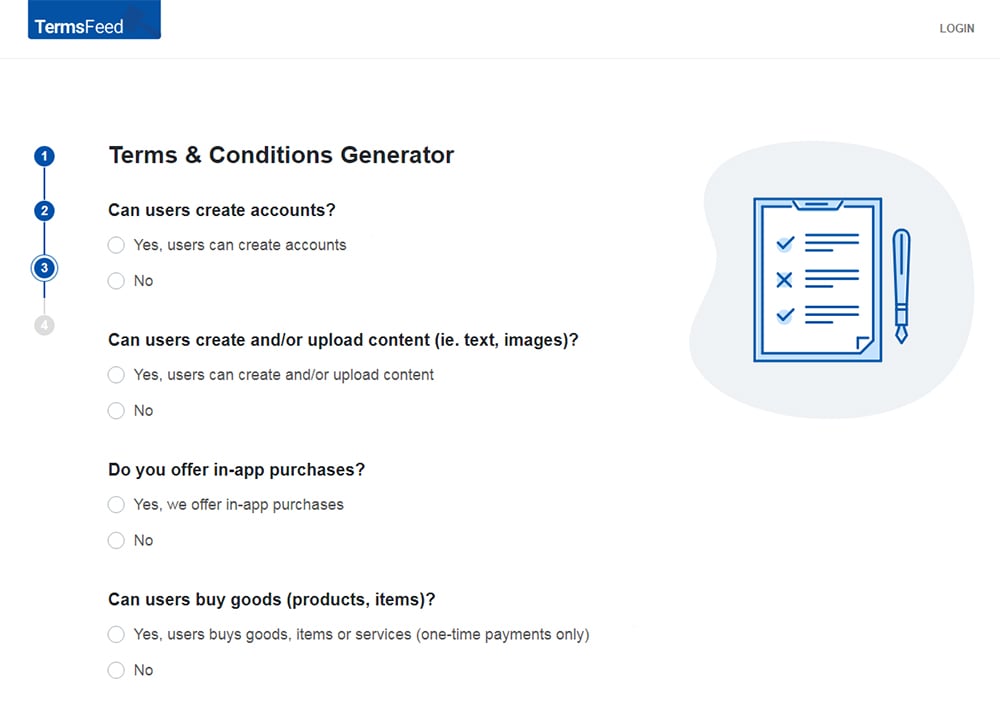 A Terms of Use agreement (also commonly known as Terms and Conditions or Terms of Use) is wider in scope and more broadly covers how your users should behave while using the app.

The Terms of Use doesn't usually give your users the right to copy your work, but rather sets out how they can use the work. Terms of Use are usually much more general and would contain clauses such as:

It's common to see Limitations of Liability clauses and Warranty Disclaimers in both agreements.

These clauses are included so that you can protect yourself in the case of your software malfunctioning or your users improperly using your software.

One example might be that if you create an accounting app, you would limit your liability so that you aren't responsible if your users incorrectly use the app and get their tax return wrong.

Do I need both a Terms of Use and an EULA?

A Terms of Use is more useful if your app has a server-side component, where your app communicates with your server.

Some examples of this are Gmail, 500px, Dropbox etc. where they are essentially just an app that links with your web platform.

A Terms of Use is useful here because it can cover all of the aspects in which your user interacts with your service, such as blocking abusive accounts.

If your mobile app is essentially a mobile access point for a SaaS product that you make (such as Dropbox), don't use an EULA but use a Terms of Use instead. You don't want to accidentally license your software to your users when they are signing up for the service itself.

An EULA is narrower in scope and only covers the terms of the license of the app software itself, so it is more useful if your app doesn't communicate with a server (i.e. everything stays saved locally on the mobile device).

There are questions about whether EULAs are even legally binding. If you include an "I Accept" button, it is more likely to be enforceable, but courts have criticized lengthy agreements with hidden clauses that users cannot devote the time to reading.

This applies to Terms of Use as well. You can fix this problem of enforceability by ensuring that you display your agreements in an easy-to-find place in your app, include an "I Accept" button to prove that your user has agreed to them, and highlight any particularly important clauses in bold or capital letters so that your users can see them.

Another factor to consider when you are deciding if you want to include an EULA or Terms of Use (or both) is whether or not you want to distribute your app in an app store. App stores oftentimes have requirements that you must comply with, including providing certain legal agreements with your app.

If you don't have your own EULA, Apple imposes a default EULA that binds the user to its terms when they download your app. The default EULA includes things like defining the scope of the license, consent to allow the use of data about the user's device, a limitation of liability, exclusion of liability for third party materials and an exclusion of warranties.

This default EULA from Apple doesn't cover everything you might want to include in your own EULA, so it is usually good to create your own that's tailor-made for your app.

When it comes to Google, there isn't such a strong default EULA that you can use. The Google Play Developer Distribution Agreement from Google includes at clause 5.3 a requirement that you grant to your users a:

"non-exclusive, worldwide, and perpetual license to perform, display, and use the Product."

It also notes in the same clause:

"If you choose, You may include a separate end user license agreement (EULA) in Your Product that will govern the user's rights to the Product, but, to the extent that the EULA conflicts with this Agreement, this Agreement will supersede the EULA."

So while you can include your own EULA, it can't contain terms that go against the Google Play Developer Distribution Agreement.

The Google Play Terms of Service include some terms between Google and your users that protect you, such as IP protection and disclaimer of warranties. There is no limitation of liability, however, and no privacy-related terms.

This means that if you are developing an Android app, there is a stronger case for including your own EULA and Terms of Use than there is for relying on Google's.

As both the EULA and Terms of Use cover different aspects of how your users use your app, in most cases it's important to have both of them.

If you only want to include one of these legal agreements, at the very least draft a good Terms of Use and include all of your licensing information within it.

The Google Play Developer Distribution Agreement does state that you can choose to include a separate EULA for your mobile app, however, which leaves some doubt about whether you can cover your licensing information inside your Terms of Use.

Here's an example of a license included with a Terms of Service instead of a EULA in Dropbox's iOS app: 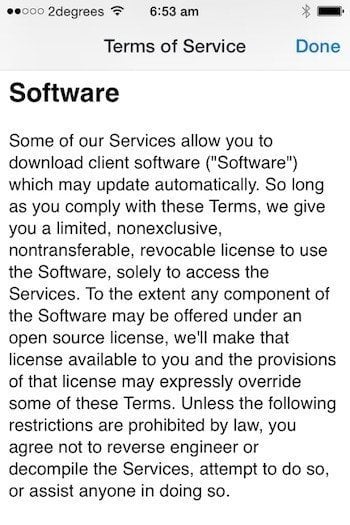 How to display the agreements in your app

So now you know which legal documents you should use, and what should go in them, but where should you put them in your app?

As noted above, most EULAs will pop up when you first open the app. This is commonly how they appear on PC or iPad/tablet as well. When downloading software such as Adobe Acrobat, an EULA will appear when installing the program.

On mobile apps, an EULA agreement usually appears in the same way and is agreed to by using a "clickwrap" method (where you have to click "Accept" or "I Agree" to proceed).

Here's an example that pops up when you first open the SanDisk app on Android: 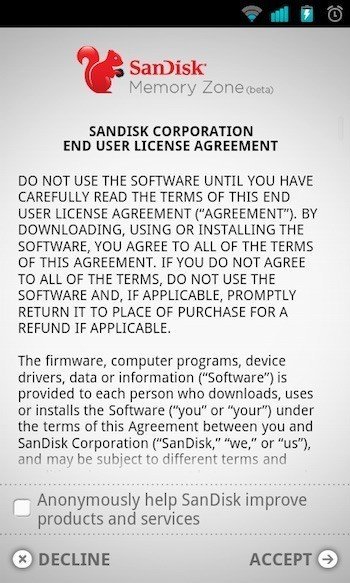 Other mobile apps also display the EULA by linking to an external website.

Here's an example from a BitTorrent app: 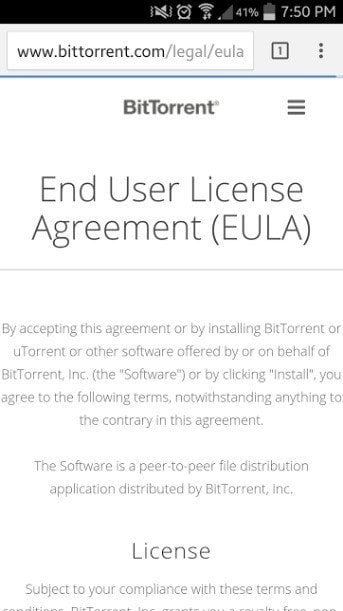 Terms of Use don't usually pop up when your user opens the app for the first time, but there's no reason why you can't set it up that way if you want to.

Instead, they are usually placed within a menu (Settings, Legal or About menu) within the app like in this example from Dropbox: 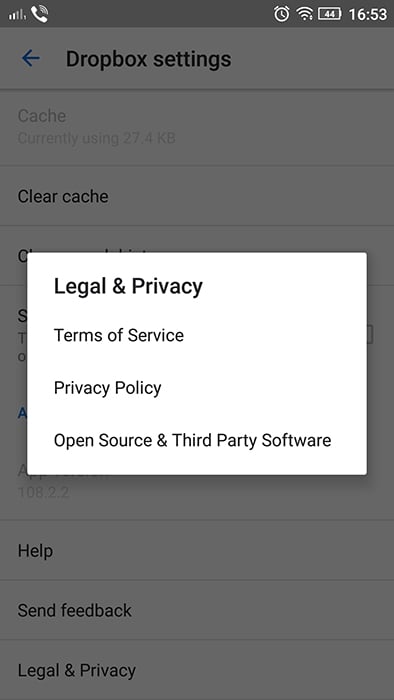 The Terms of Use can be hosted on an external website that is accessed by way of a link within the app or embedded within the app, as seen here: 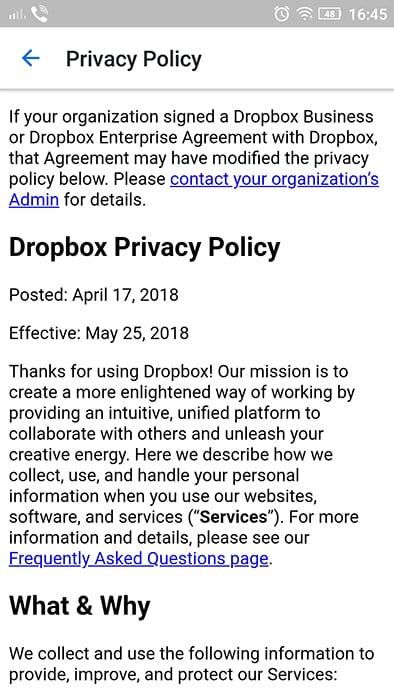 Terms of Use are also commonly presented when a user actually signs up for an account with the app (as opposed to when the user simply installs the app as seen with EULA's): 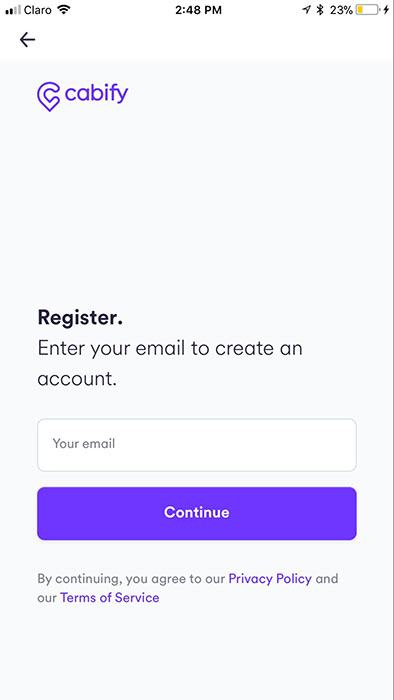 EULAs and Terms of Use both serve different purposes, but both are important for your mobile app.

Due to the requirements of the Apple store, you must have some form of EULA if you are making an iPhone or iPad app, but you can use the Apple default EULA if you wish.

When making a mobile app for Google Play store, it's more important to include your own EULA as Google has few terms already set up that will protect you.

Alongside your EULA, you should include a separate Terms of Use to address any other aspects of your legal relationship with your users and make sure that both documents are displayed prominently with "clickwrap" methods for agreement.