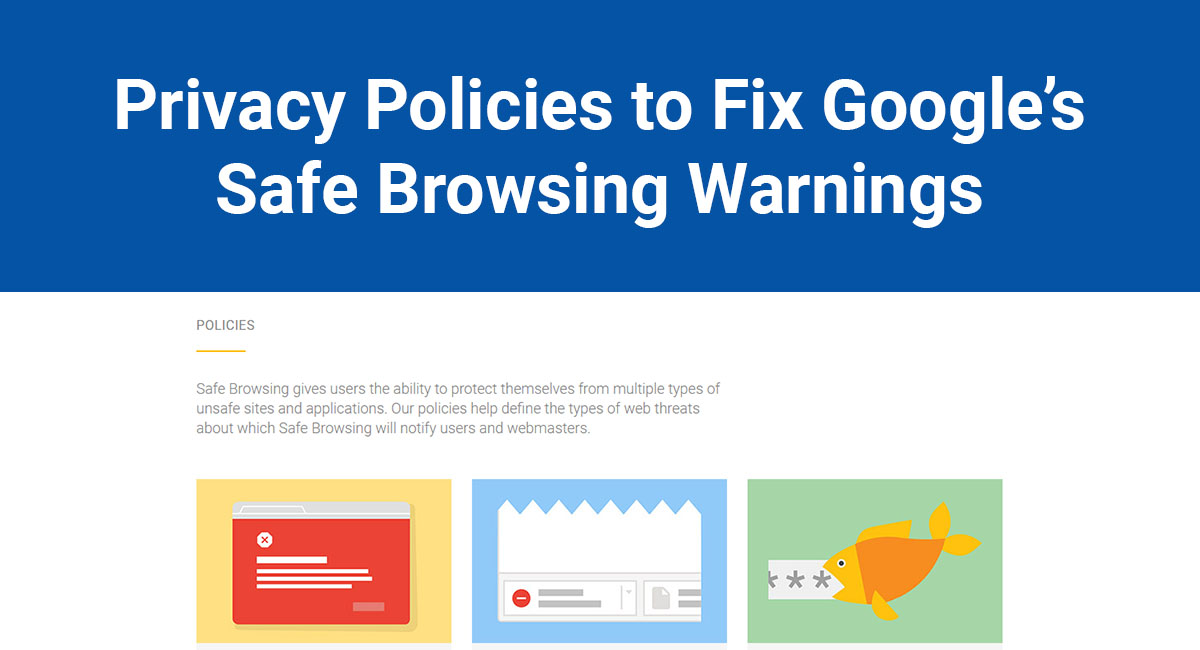 If you're like most people, you Google something every single day. What you might not know is that Google has a lot of rules and safeguards in place when it comes to what it shows in its search results. One of these safeguards is the Google Safe Browsing Warnings, which makes sure that sites have Privacy Policies when needed and aren't distributing dangerous files to your devices.

Google came up with a list of common characteristics of what makes bad software. Here's how Google sums it all up in its Unwanted Software Policy:

According to Google, the software installation process should be easy. Users should know exactly what they're downloading and what kind of value the download is going to give them. Once the software has been downloaded, it should be easy to use so that each user can actually get the value they were promised in the first place.

Google also says that software publishers should be completely honest about what kind of user information they collect. Plus, they should offer an explanation that's easy to understand instead of chock full of legal jargon.

And finally, Google says that it should be easy for users to delete or uninstall software if they try it and don't like it.

Google is serious about enforcing this policy. They're so serious, in fact, that they've decided to create Safe Browsing Warnings that will appear on apps and websites that lead to apps and software downloads if the software collects user information without disclosing that to the user and/or getting the user's consent.

In other words, if your app or software doesn't have a privacy policy that details what kind of information you're collecting, or if you don't ask users for their consent to collect information about them, Google is going to warn anyone who comes near it.

As for apps, this warning won't just appear inside the Google Play Store. It will also appear anywhere that people can download your app, including Apple's app store.

What if Google doesn't think you're in compliance with its Unwanted Software Policy? 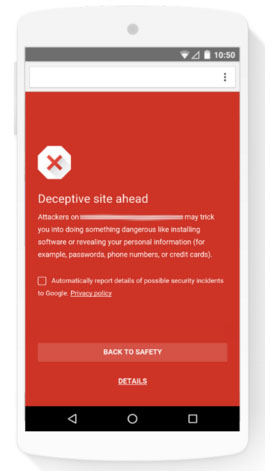 Even worse, it could remove your software from users' devices altogether.

The Chrome Cleanup Tool was created to automatically remove junk software that could interfere with your ability to use Google Chrome. Originally, Google explained that many software downloads come bundled with additional software that users don't want or even know about. Some experts call it "piggybacking," but no matter what you call it, by getting rid of it, Chrome can run more efficiently.

This tool knows how to pick out and remove software that violates Google's Unwanted Software Policy.

Devices don't automatically come with Chrome Cleanup, but Google offers users a chance to download it if they think something fishy is going on. Users will see something like this pop up on their screen: 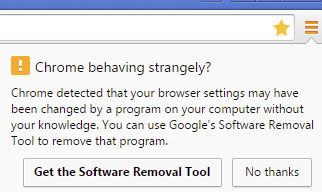 The bad news for you? Once a user has it, there's no way to disable it. In other words, even if people are perfectly happy with your software, Google could deem it "unwanted" and remove it!

So how do you avoid having this happen to your software?

According to Google, if your app collects user data - like phone numbers or email addresses - you need to tell your users about it upfront. And, if you want to collect user data that seemingly doesn't have anything to do with the way the app functions, you'll need to explain why you're collecting it.

Specifically, Google wants you to tell your users how you're going to use the information, then ask for their permission to collect it.

Even the best privacy policy in the world doesn't do any good unless users (and Google) can find it.

The exact wording will depend on how your app operates and what kind of information you plan on collecting from your users.

The best advice is to skip the legal jargon. Instead of big fancy words that most users won't understand, write your privacy policy in plain English.

Also, make sure that your privacy policy is easy to read on a mobile device. If you have the wrong layout, your users won't be able to read all of the questions you've answered.

Check out this example of a bad mobile layout: 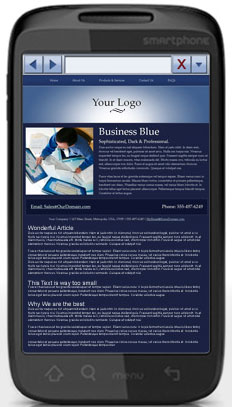 If your privacy policy looks like this, no one's ever going to know what it says. Because the font is so small, users would have to zoom way in to make sense of anything. Then, they'd have to scroll all over the place just to read a single sentence. No one has the patience to do all of that!

Here's an example of a Privacy Policy from Sleep Cycle that looks clean and easy to read on a mobile device. 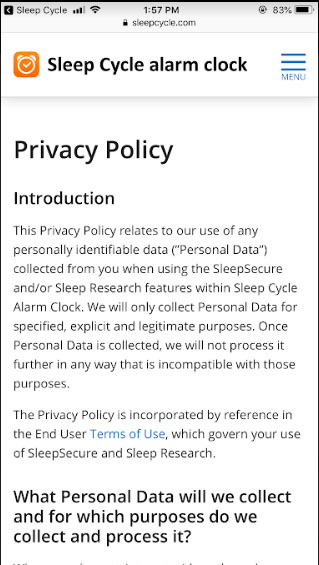 There's one more thing you need to do to keep Google happy.

Get Users to Consent to Data Collection

It isn't good enough just to write a great Privacy Policy. Google also wants your users to consent before they dive into your app. Because of this, you should have a consent box pop up as soon as the user logs in for the first time.

Google doesn't want your consent box buried in with other information that has nothing to do with personal data. Consent is so important to them that they require it be front and center on your app.

Specifically, Google wants you to get user consent before you start collecting any kind of data.

They also want your users to perform an action - like tapping a checkbox or clearly-labeled button on the screen - in order to give their consent.

This is a good example of how to get a user's consent as soon as they log in: 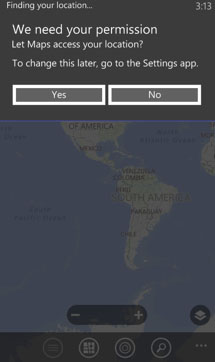 Before you read a single word, the map background makes it fairly clear that this software is going to do something with your location.

Clear, simple text states, "We need your permission." The user can either tap "Yes" or "No" to grant permission. Users are informed that they can change their minds on this later. In a few short phrases, this consent screen says everything it needs to say.

If you miss either of these two things - the Privacy Policy itself or the request for consent - Google will likely send you a warning letter. If you don't comply within 30 days, they have the right to remove your app from the Google Play Store altogether.

Here's an example of a warning letter Google may send out to app developers in violation: 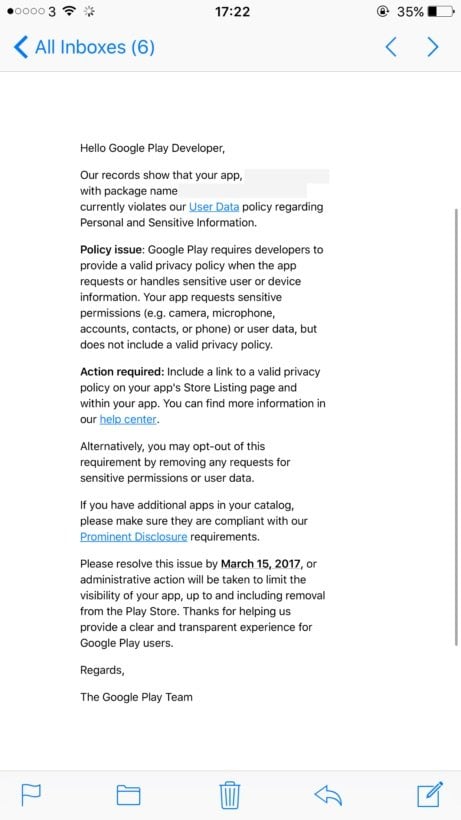 Note how it includes the specific policy issue as well as the action required. A deadline is given for when the issue/s must be resolved.

If the issues aren't resolved by then, Google states it will take administrative action to limit the visibility of the app, up to and including removing it from the Play Store.

By having the right Privacy Policy, displaying it correctly and getting proper consent before collecting personal information, your app and software will satisfy Google.

This will keep your app from being dubbed as dangerous, and keep it accessible and in the green with Google and your users.