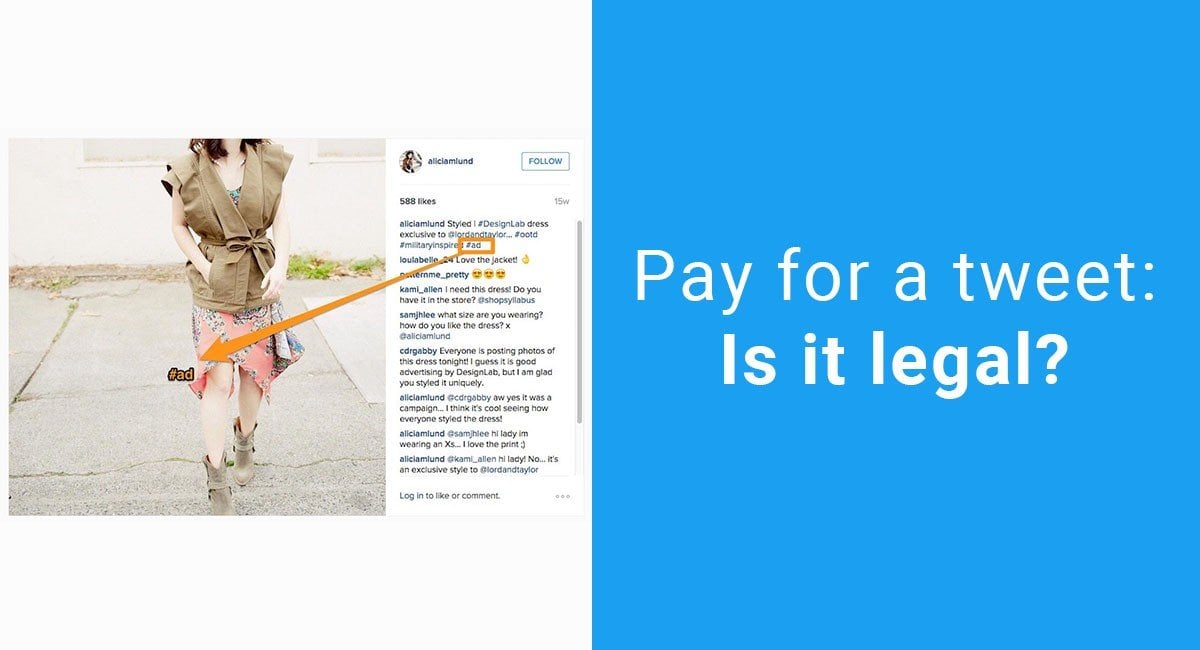 An endorsement is when someone basically gives their approval, support, or recommendation for something. Typically, endorsements are paid for by companies, or some sort of incentive is offered.

For example, a clothing company could pay a popular fashion blogger or movie star to wear its clothing and publicly endorse the company by tweeting about how much she loves the clothing line or posting a picture of herself wearing clothes from the company.

Or, the company can hold a contest where people enter the contest by tweeting pictures of themselves wearing clothes from the company and a random winner will be selected from all those who tweet.

While Twitter doesn't have explicit rules directing how endorsements or other promotional content should be handled, including if it's allowed to pay for a tweet or not, there are some "Guidelines regarding Promotions on Twitter".

These guidelines don't forbid promotions, ads or any sort of specific content from being tweeted.

Instead, they provide suggestions for best practices, such as not posting the same tweet repeatedly, not creating multiple accounts in order to enter contests more than once, and using relevant hashtags.

Pay for a Tweet: Legal or Illegal from termsfeed

Twitter's guidelines do include a section that states that all applicable laws and regulations should be complied with by Twitter users who are starting any contests or sweepstakes.

One of these applicable laws is the FTC Act that prohibits "unfair or deceptive acts or practices" in advertising claims, marketing, and promotional activities, and sales practices.

According to the "FTC's Guides Concerning the Use of Endorsements and Testimonials" document, Section 5 of the FTC Act requires there to be a disclosure of a material connection between an advertiser and an endorser when the relationship isn't one that would be readily apparent to consumers who are viewing the endorsement.

Simply put: If it's a paid tweet, you must disclose this.

If the person who's endorsing a product has a material connection with the company, such as an employee or stock or shareholder, or is in some financial or material way compensated for that endorsement, the endorsement post must disclose that connection if the particular post is one that consumers wouldn't expect or readily know to be an advertisement, sponsored post, or endorsement.

Disclosure can be as simple as adding a hashtag #ad, #sponsored or anything else that would inform users of the nature of the post to the beginning or end of the post.

Twitter isn't the only place where disclosure is required.

Any platform that can be used to promote content, endorse a brand or product, create an advertisement or include affiliate links must disclose the nature of the content according to the FTC.

Take for example, Amazon Associates and the use of affiliate links.

The FTC states that individuals who use affiliate marketing links - links to a company (in this case, Amazon) that will pay you a commission if a purchase is made using your link - must place a clear and conspicuous disclosure. 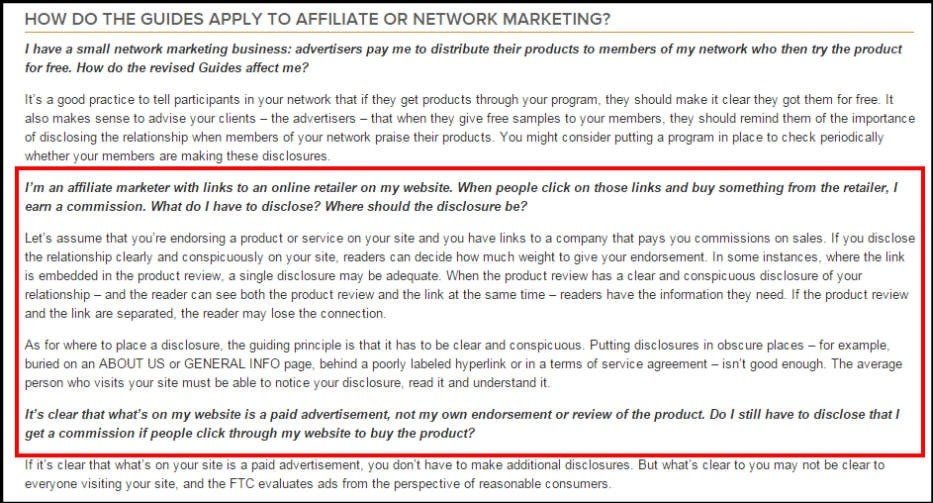 Web sites usually place this kind of disclaimer in the main footer at the bottom of every web page, such as the disclaimer below from Au Naturale Nutrition that lets users know that affiliate links are used. 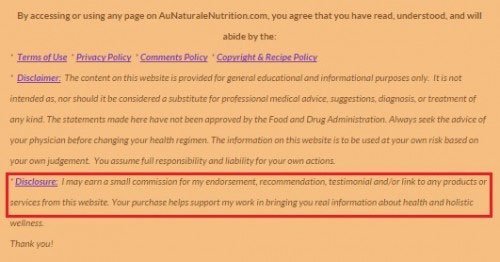 When a user clicks on "Disclosure" from Au Naturale Nutrition, she/he is taken to a disclosure page that thoroughly explains what an affiliate link is and why this relationship is being disclosed through the entire website: 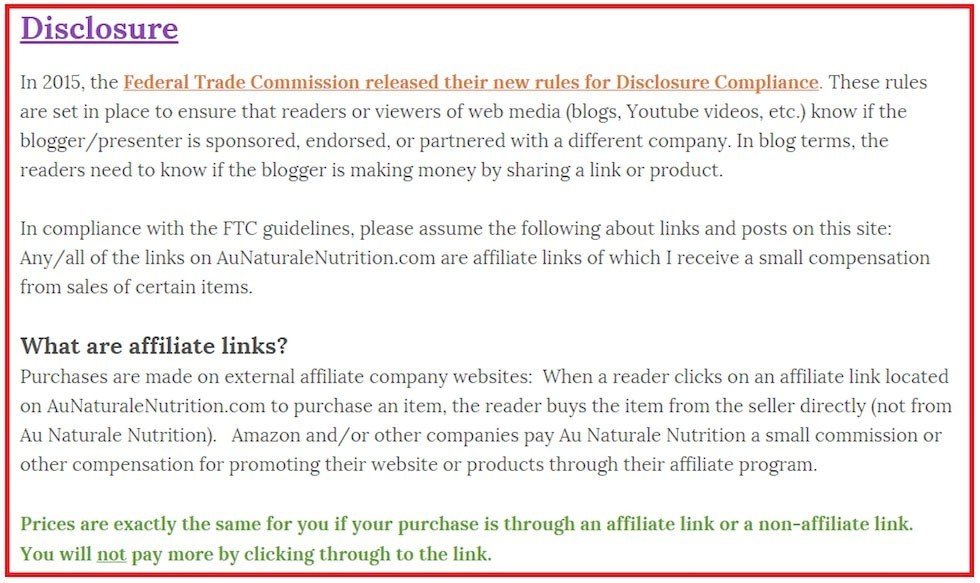 The requirements for compliance aren't complex.

You just need to make sure to disclose the nature of your post as an ad, an affiliate link, an endorsement, a promotion, or anything that isn't obvious to consumers and that involves commercial benefits to you.

In this case, the FTC filed a suit against the company after it gave a dress from the company's new collection to 50 popular style and fashion bloggers, as well as $1,000 to $4,000, in exchange for these bloggers to post images of themselves wearing the dress on Instagram.

The only rules were that the posters had to include the @lordandtaylor tag, as well as the hashtag #DesignLab in the post.

No mention of the advertising or paid endorsement process was required.

The FTC found that this was a misrepresentation and that it made it seem like the endorsements were coming from objective and independent sources when really the sources - the fashion bloggers - were paid to post.

All that Lord & Taylor had to do here to avoid FTC violations was have each blogger add the hashtag #ad to their posts.

Here are some examples of tweets that properly disclose an endorsement.

The tweet below starts with #ad so it's incredibly clear to anyone who reads the tweet that this is an ad. Putting this hashtag first is a great way to make it very obvious immediately that the tweet is an ad. 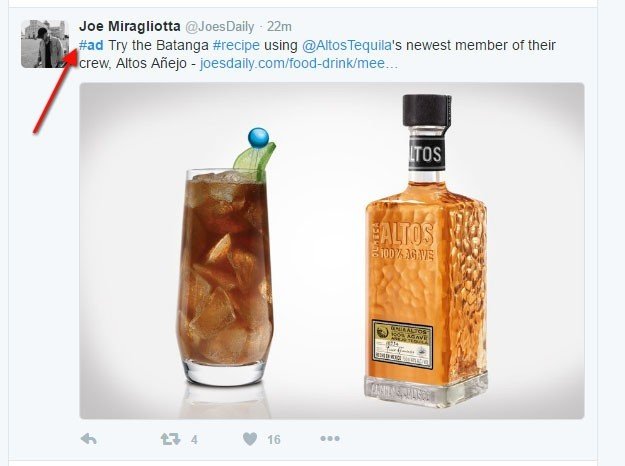 Who What Wear puts their ad hashtag at the very end of the post, which is still completely acceptable and adequate. Hashtags typically are used at the end of posts, so nothing about this is atypical or anything a reader would likely miss. 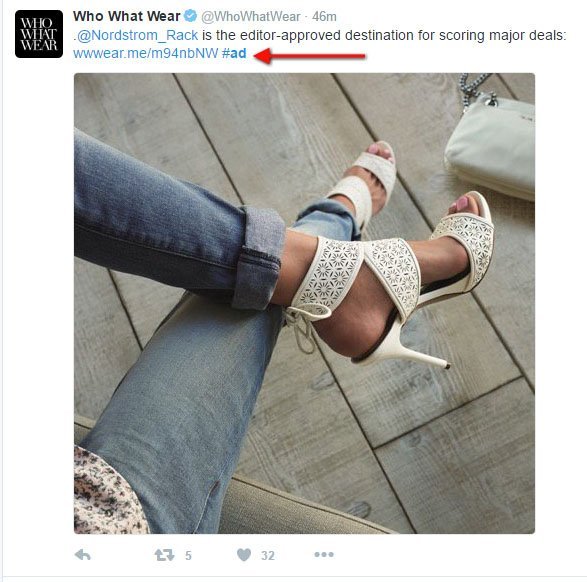 While the prior two examples were clearly dealing with companies, products or brands, here's an example of a tweet that looks like it's just an individual showing a video he made.

You wouldn't ever assume it was an ad or a paid endorsement tweet.

However, the ad hashtag at the end really works well to let readers know that this isn't just Kevin Droniak out making a video for fun, but that there's some sort of monetary component to this video.

Both the ad and contest hashtags are used in the post below to make it very clear to readers that the post is part of a contest entry, as well as an effectual ad and endorsement for the company. 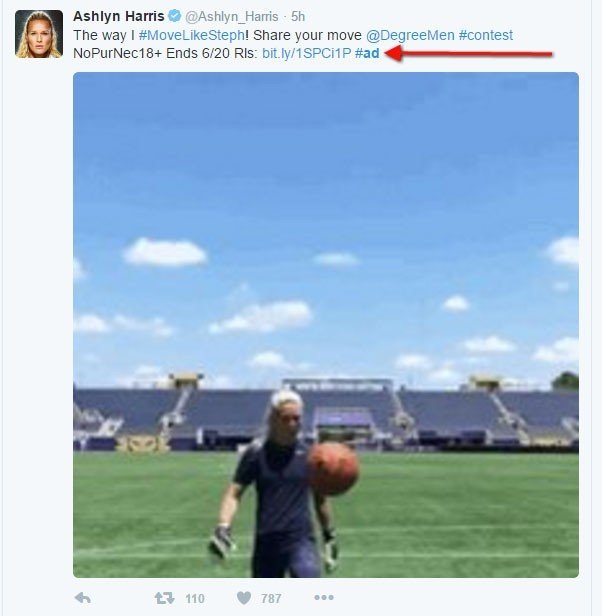 This ad hashtag is done in all capital letters and bold font, which works really well to draw attention to it and make an emphasis on the fact that the post is an ad and endorsement. 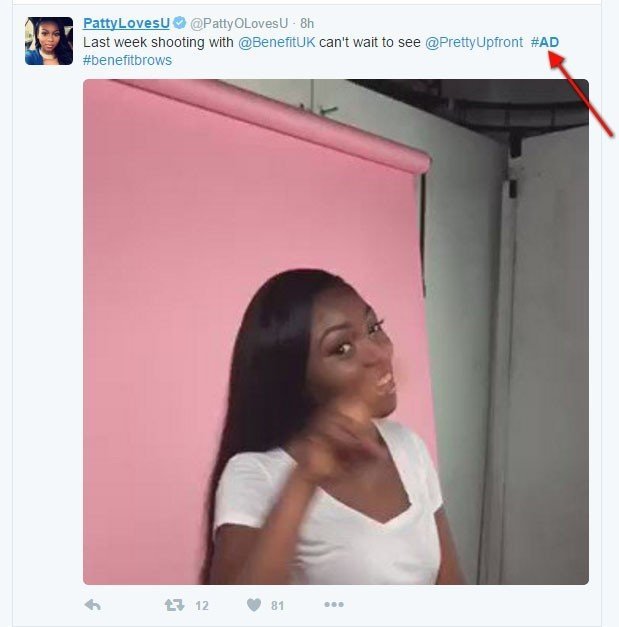 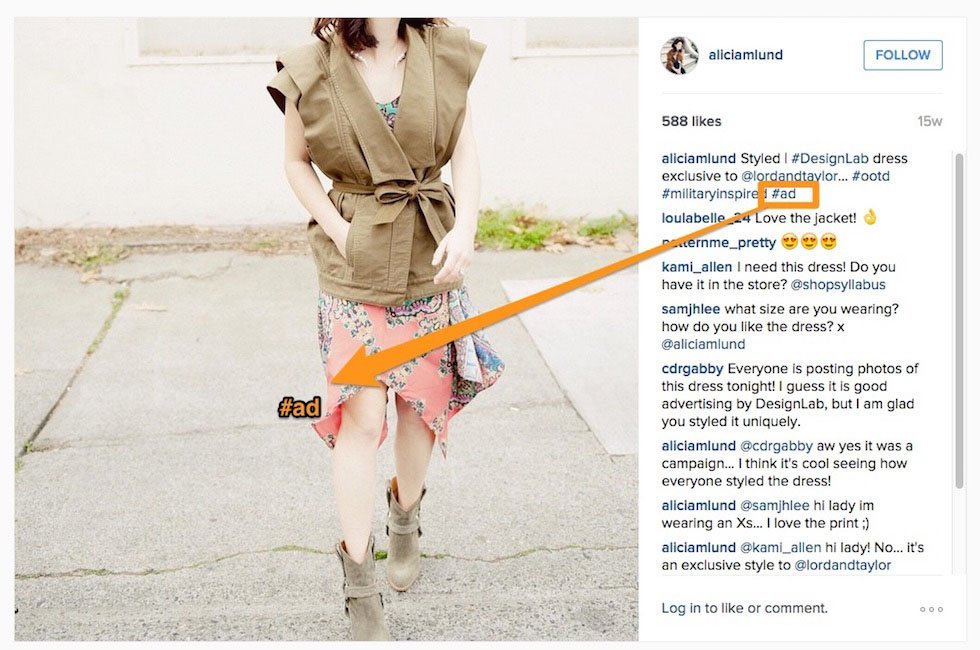 So, while getting paid to make a tweet or some sort of social media post that endorses, promotes or works as an advertisement for a company, brand, or product aren't illegal, you can get into legal trouble with the FTC if you do not disclose properly that your post is an endorsement or some sort of ad.

In summary, here are the guidelines:

Remember, if you're an employee of a company or somehow will benefit financially if the company does well, promoting the company will still be considered an ad for purposes of the FTC's requirement and will need to be disclosed.

You don't need to be directly and specifically paid for the tweet to have it count as an endorsement, but if the chance of you benefitting financially from the tweet being there, your disclaimer should be as well. 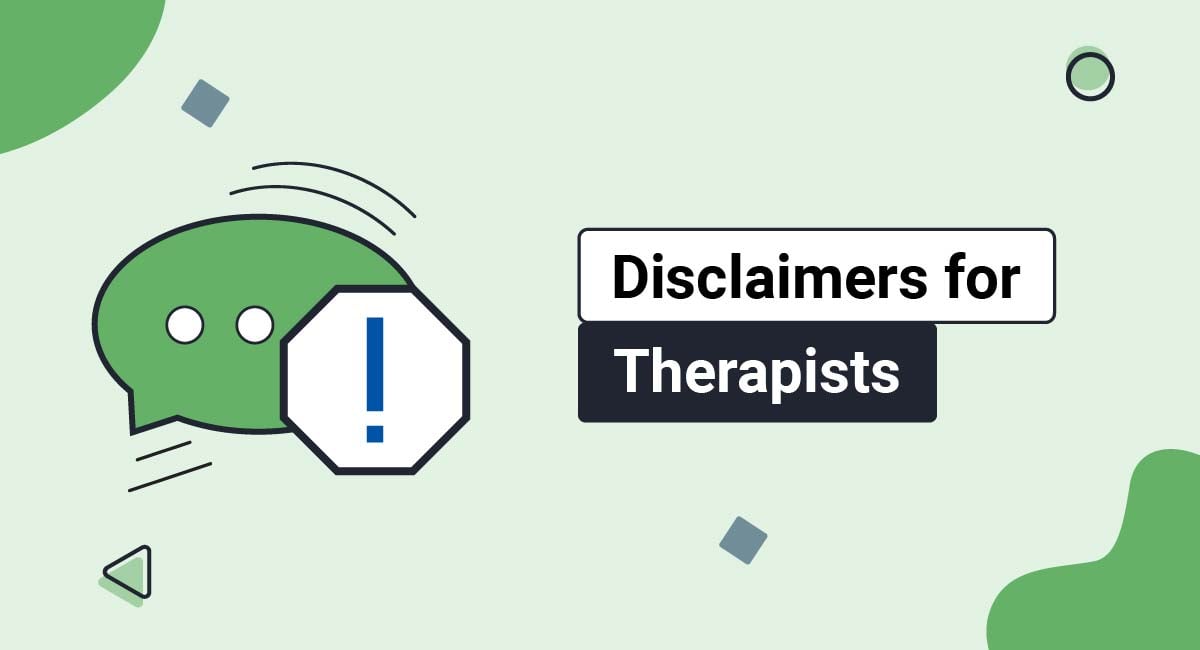 As a therapist, your priority is to provide a safe, confidential space for your clients. It's essential that you show... 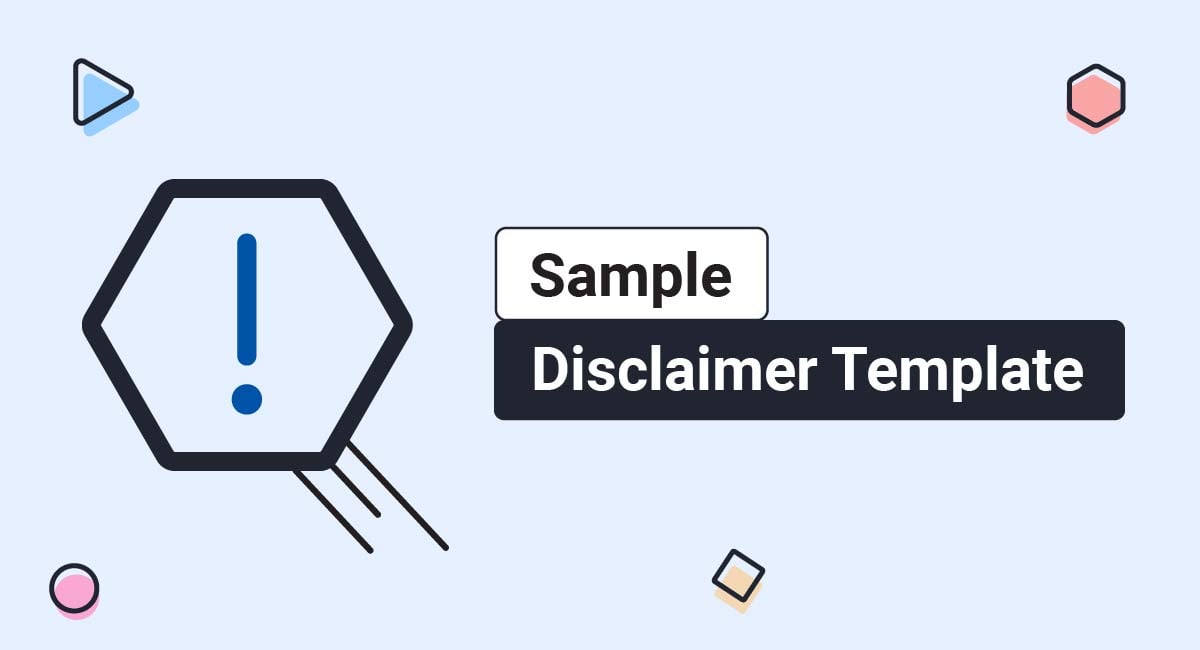 A Disclaimer on your app or website is often the best way to address specific points of liability that could... 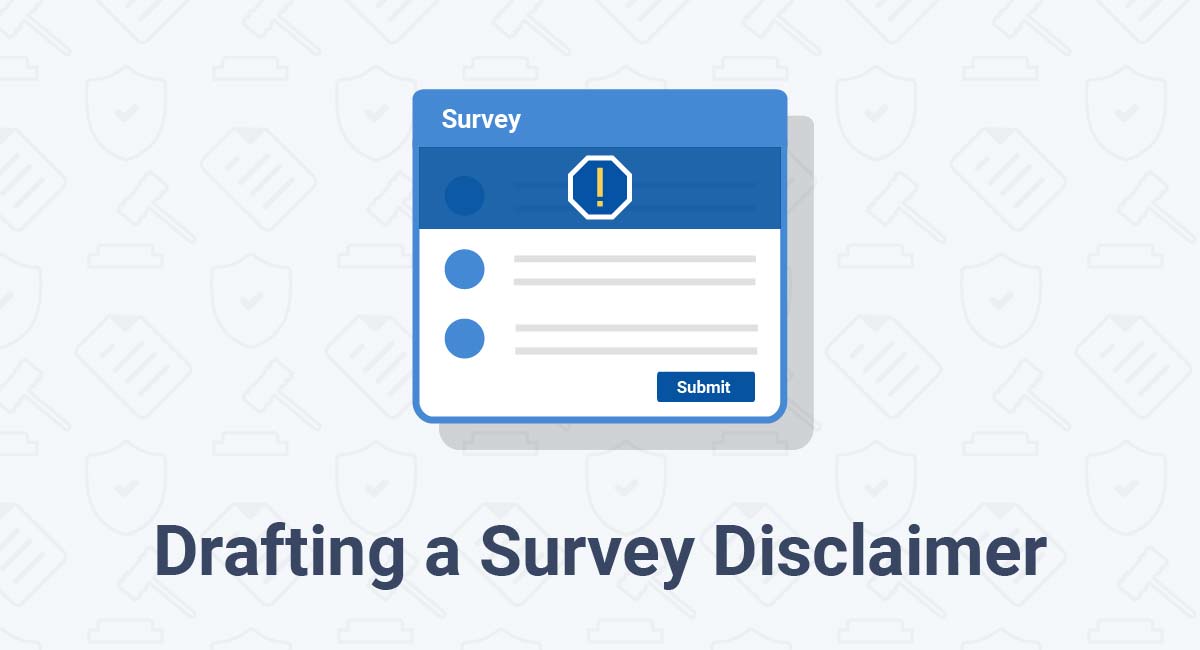 A Survey Disclaimer is a short statement that lets users know that your survey may collect personal information, and that...