Brazil's LGPD vs. the GDPR 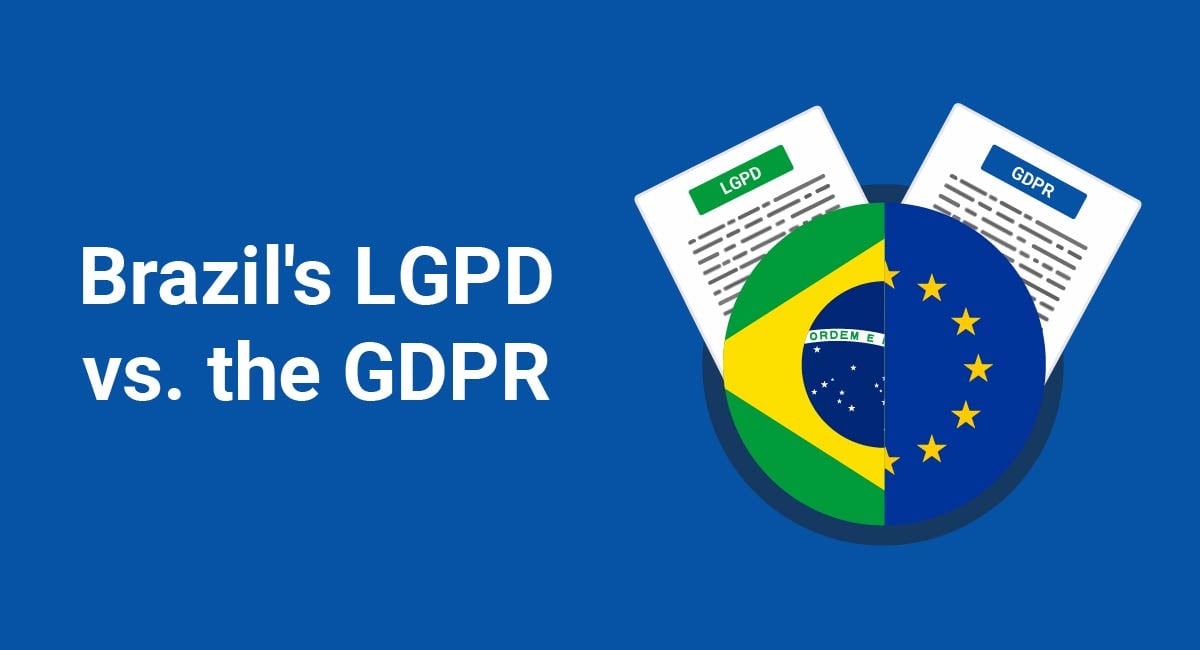 However, there are a few important differences between the two laws. If you're more familiar with one than the other, it's crucial be aware of these distinctions.

Here's a run-down of the similarities and the differences between the LGPD and the GDPR.

Before we get into a detailed comparison between the GDPR and the LGPD, here are a few ways in which these two laws are fundamentally similar:

First, we're going to look at the differences in how each law defines key terms.

The LGPD defines "personal data" as "information regarding an identified or identifiable natural person."

These definitions are practically identical, and the small difference is probably down to translation. However, whereas the GDPR provides examples of personal data, the LGPD does not. This means that there might be more room for interpretation of the LGPD.

The special categories of personal data under the GDPR include information about the following things:

The list of "sensitive personal data" in the LGPD is identical, except that it includes one additional category: information regarding an individual's membership of religious, philosophical, or political groups.

The terms "controller" and "processor" are present in both the GDPR and the LGPD, but they are defined differently in the two laws.

Despite the different wording, the GDPR's definitions have retained the same core meanings in the LGPD.

The LGPD's definition omits the phrase "alone or jointly with others." Accordingly, unlike the GDPR, the LGPD does not include the concept of "joint controllers."

At the core of both the GDPR and the LGPD are sets of principles, requirements, and data subject rights.

The GDPR provides seven principles of data processing, whereas the LGPD provides ten.

Here's a breakdown of how data processing principles differ and overlap across the GDPR and the LGPD.

Many of these differences come down to translation and drafting choices. Compliance with the GDPR's principles should ensure compliance with those of the LGPD, and vice versa.

The LGPD's "requirements for processing" are equivalent to GDPR's "lawful bases for processing." Again, there is significant overlap between the two laws in this area.

Here's a breakdown of how the "lawful bases" and the "requirements" differ and overlap across the GDPR and the LGPD:

Companies whose processing activities all occur under one of the GDPR's lawful bases will likely also be compliant with the LGPD.

The "data subject rights" are expressed quite differently across the GDPR and the LGPD. However, there is little substantial difference between the two.

The LGPD also contains several additional rights that are implicitly present in the GDPR, but not among the "data subject rights" enumerated across Section 2, such as:

Neither the GDPR nor the LGPD explicitly refer to a "Privacy Policy," but both laws require controllers to provide clear and transparent information to data subjects about their processing activities.

Here's a breakdown of what such a document must contain in each law:

The upshot of the above is that, if you have a GDPR-compliant Privacy Policy, it will require few amendments to make it compliant with LGPD.

The LGPD defines "consent" as a "free, informed and unambiguous manifestation whereby the data subject agrees to her/his processing of personal data for a given purpose."

The GDPR defines "consent" as "any freely given, specific, informed and unambiguous indication of the data subject's wishes by which he or she, by a statement or by a clear affirmative action, signifies agreement to the processing of personal data relating to him or her."

The LGPD lacks the "affirmative action" element of the GDPR's definition.

These definitions are very similar. This implies that the LGPD is likely to require strong, opt-in consent, meaning "pre-ticked boxes" and other forms of "implied consent" will be invalid.

Data security is one area where the GDPR and the LGPD appear to diverge quite significantly.

The GDPR's data security requirements are set out across Article 32, and include pseudonymizing and encrypting personal data where possible and regularly testing security systems.

The LGPD requires organizations to adopt "technical and administrative measures" to safeguard personal data. However, it is left to the National Data Protection Authority to establish what these measures should be.

Under both laws, organizations can consider factors such as cost, the nature of the personal data, and the severity of risk when deciding what safeguards to impose.

Both the GDPR and the LGPR require controllers to undertake a Data Protection Impact Assessment (DPIA) (known as an "impact report" in the LGPD) where the personal data is sensitive in nature, or where the means of processing are particularly risky or experimental.

Both laws require the organization to report data breaches to the Data Protection Authority. The GDPR specifies a maximum time limit of 72 hours, whereas the LGPD says that the notification must occur within "a reasonable time period, as defined by the national authority."

Both laws require organizations to write a data breach notification letter containing information concerning the consequences of the breach, and any steps taken to contain or mitigate it.

The difference between the two laws' reporting obligations is that the GDPR is more detailed, requiring controllers to notify the Data Protection Authority of:

"...a description of the nature of the affected personal data [and] information on the data subjects involved."

The GDPR also requires controllers to notify the affected data subjects if the breach results in "a high risk to [their] rights and freedoms."

The LGPD does not mention a requirement to notify data subjects, but states that the National Data Protection Authority may require a "broad disclosure of the event in communications media."

Both laws make warnings, reprimands, and injunctions available to Data Protection Authorities. Both laws contain a "private right of action," allowing data subjects to take a privacy case to court.

Violating the GDPR can result in the following penalties:

Violating the LGPD can result in:

While the maximum one-off fines are lower under the LGPD, its daily fines could potentially stack up to some huge sums.

Businesses operating in Brazil have until August 1, 2021, to meet the LGPD's requirements. Those who have worked hard to become GDPR-compliant will not need to make many changes to comply with the LGPD.

Although the Brazilian law is shorter in form, it imposes many of the same obligations as the GDPR. At the core of the LGPD are its principles, requirements, and data subject rights. These sections are all very similar to their EU counterparts.