Social media has drastically changed advertising. Along with the more conventional forms of marketing, such as print, TV, radio, and pay-per-click ads, businesses are buying the influence of social media personalities.

Social media influencers could be a great way to promote your business online. However, before you begin advertising in this way, you must understand the rules.

While this form of advertising is not exactly new, it has been receiving a lot of attention from regulators in recent years. A number of countries have introduced new rules and tougher laws that control the relationship between businesses, online influencers, and their followers.

When operating online, you often have to meet the requirements of several different jurisdictions. In addition to obeying the law in the country in which your company is based, you must understand the advertising rules that protect your customers where they live.

For example, if a company based in the U.S. wants to market its mobile app to consumers in Canada and the UK, the company must obey three sets of rules.

Let's take a brief look at how advertising law is developing in some important markets worldwide.

The FTC Act (available here) is the most important law for businesses wishing to advertise to U.S. consumers. It empowers the Federal Trade Commission (FTC) to set and enforce rules around all forms of marketing, including the use of social media influencers.

Other regulators work alongside the FTC to enforce industry-specific laws. For example, the Food and Drug Administration (FDA) enforces rules around advertising of foods, cosmetics, and pharmaceutical products.

The FTC has stepped up its enforcement efforts in this area recently and has brought scores of cases against social media influencers and endorsers over the past two years.

In February 2020, the FTC began strengthening and formalizing its powers, stating that "misinformation is plaguing the digital economy" and warning that it will take "take bold steps to safeguard our digital economy from lies, distortions, and disinformation."

In the UK, three public bodies regulate most marketing activities:

In recent years, these organizations have made significant efforts to raise awareness of the rules around using social media influencers. For example, in early 2019, the CMA secured undertakings from 16 high-profile celebrities to improve their social media marketing practices.

Considering the enforcement actions of regulators in all major markets, the lesson is clear: Advertising regulations apply to all types of advertisements, including endorsements made by influencers.

Our checklist combines the advice given by market regulators worldwide. It will help you stay on the right side of the law when using social media influencers to promote your business.

Although advertising rules vary between jurisdictions, certain practices are mandatory across practically all of them. Other actions are simply good practice and common sense, and they will help ensure that your business is operating in an honest and transparent way.

At every step, remember that your business is at least jointly responsible for the messages it solicits from social media influencers.

Understand When You're Advertising

You aren't responsible for what everyone says about your company. Hopefully, there are plenty of people who will recommend your company purely because they are happy customers.

But there's a difference between a person who freely chooses to endorse your brand and a person whose endorsement your company solicits (whether you ask for it explicitly or through implication, e.g. by sending them a free product).

According to this definition, is a link between your business and an influencer might qualify as a "material connection" if:

Many things can create a material connection, for example:

If you give or lend your product or service to a person, their endorsement of your company will qualify as a material connection. At this point, you will be engaging in advertising and, therefore, covered by advertising regulations.

If you have a material connection to an influencer, you must ensure that they disclose this.

Remember that this advertising model can take many forms, across many platforms, including:

Ensure Disclosures are Clear and Prominent

One reason influencer endorsements can be so powerful is that they are not always easily identifiable as ads.

All advertisers must clearly label any potentially ambiguous ads. To avoid accusations of deceptive or misleading advertising, you must ensure that influencers clearly disclose their material connection to your company.

There aren't many clear rules about what form a disclosure must take. However, regulators in most jurisdictions suggest several key principles.

Disclosures must be clear and unambiguous. For example:

Disclosures must be prominent. For example:

Consider the context in which the influencer is making a disclosure. If an endorsement takes place via video, the disclosure should be made within the video itself rather than (solely) in the description.

Here's an example from Twitter user @blushingnoir, who discloses a material connection to cosmetics company Biore: 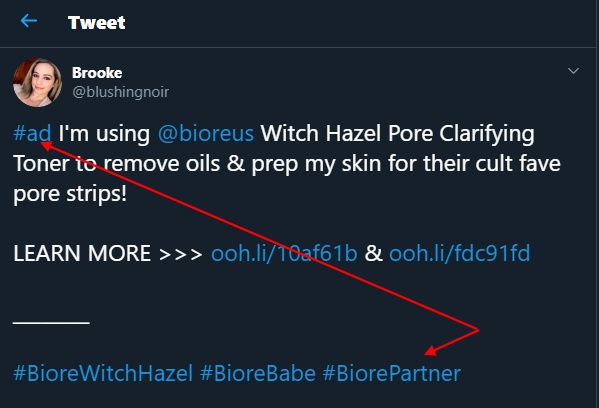 Note that there are several disclosures here: #ad, #BiorePartner, and #BioreBabe. The latter two would probably be too ambiguous in isolation.

Remember that making knowingly false claims in advertisements is forbidden in most countries.

It seems obvious that your company cannot make false claims about the performance or effectiveness of its own products. However, many companies don't realize that the exact same obligations extend influencers.

False claims made by influencers can take several forms. For example:

You should take steps to ensure that influencers are not making false or misleading claims.

But how can you influence your influencers?

Creating a Social Media Policy is a great way to demonstrate to regulators that you have taken reasonable steps to ensure that influencers are promoting your business in a legally-compliant way.

Below is an overview of some key elements you should include in your Social Media Policy.

For a more detailed look, see our article Why You Need a Social Media Policy.

Influencers must understand the legal requirements that apply to their work promoting your brand.

Many advertising regulators, including the FTC (in the US), the Competition Bureau (in Canada), and the ASA (in the UK) provide market-specific guidance for businesses and influencers engaging in social media marketing.

You should provide influencers with links to the relevant regulatory guidance to help ensure they are aware of their legal responsibilities.

Here's how Nordstrom does this in its Guidelines for Endorsers Policy: 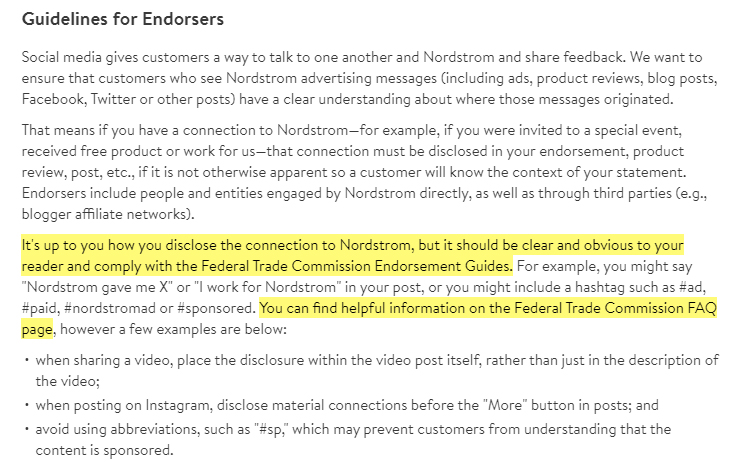 You should clearly explain what you expect from influencers. Base your guidelines on the advice of advertising regulators, and be specific.

It's particularly important to make influencers aware of the requirements around disclosures. It's best to be very clear about what text is acceptable, and where to place disclosures.

Nexon provides helpful instructions about how influencers should disclose their material connections to the company across various channels.

As explored above, it's crucial that influencers do not make any false, misleading, or unsubstantiated claims about your company. Your Social Media Policy should make this clear. 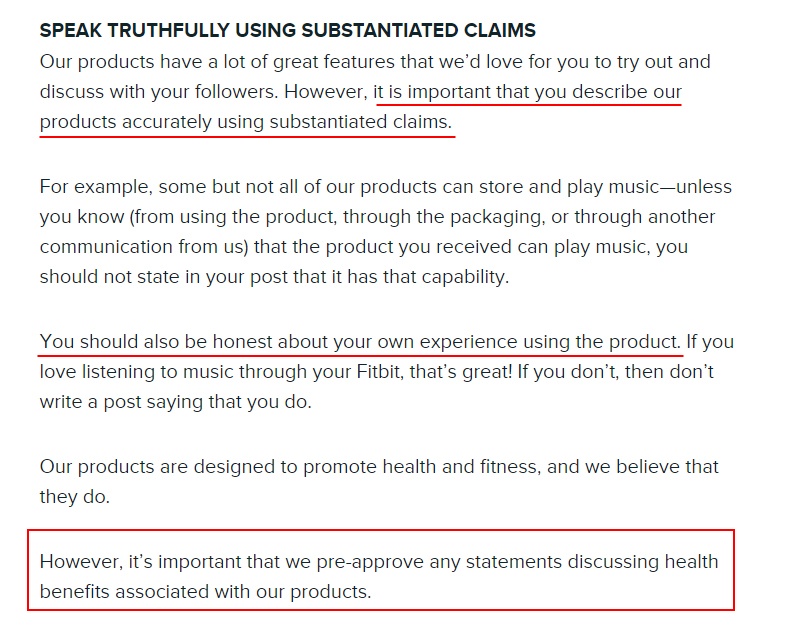 Note the text in the red box: influencers must seek approval for any health claims they make regarding Fitbit's products. Given the strict rules around advertising consumer health products, this is a sensible policy.

Running an ad campaign using social media influencers could represent a great opportunity to promote your business. But you must ensure that you obey the rules.

To prepare for your influencer ad campaign: 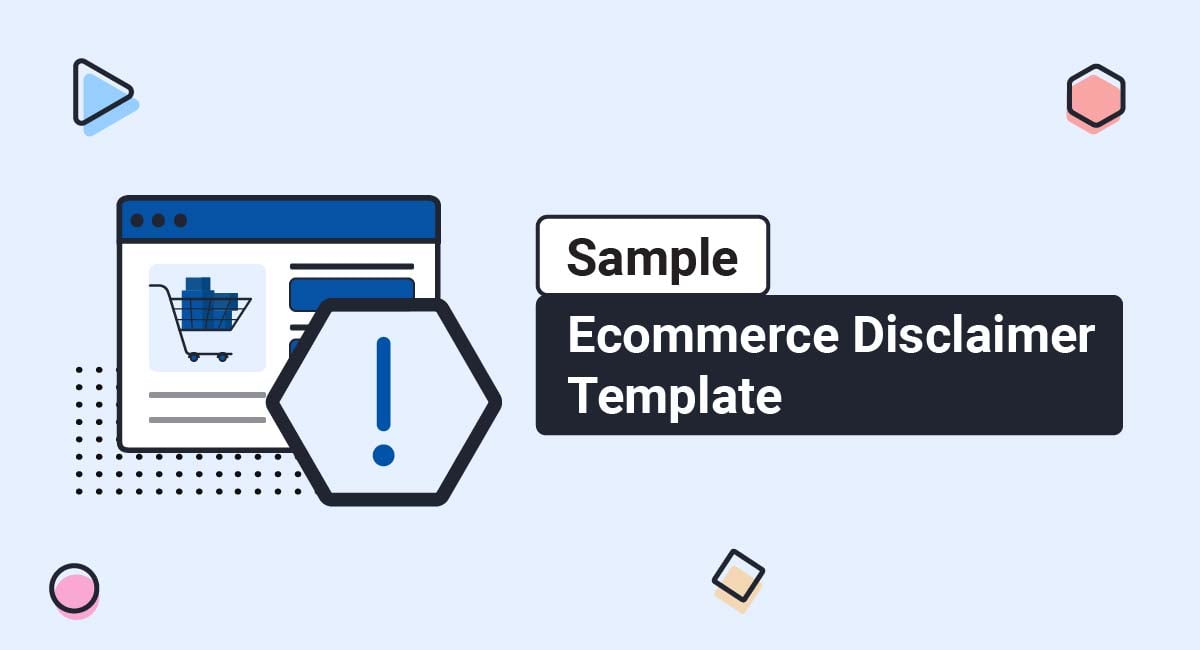 When running an ecommerce store, there are many things to think about, from the products you're selling, to your Shipping... 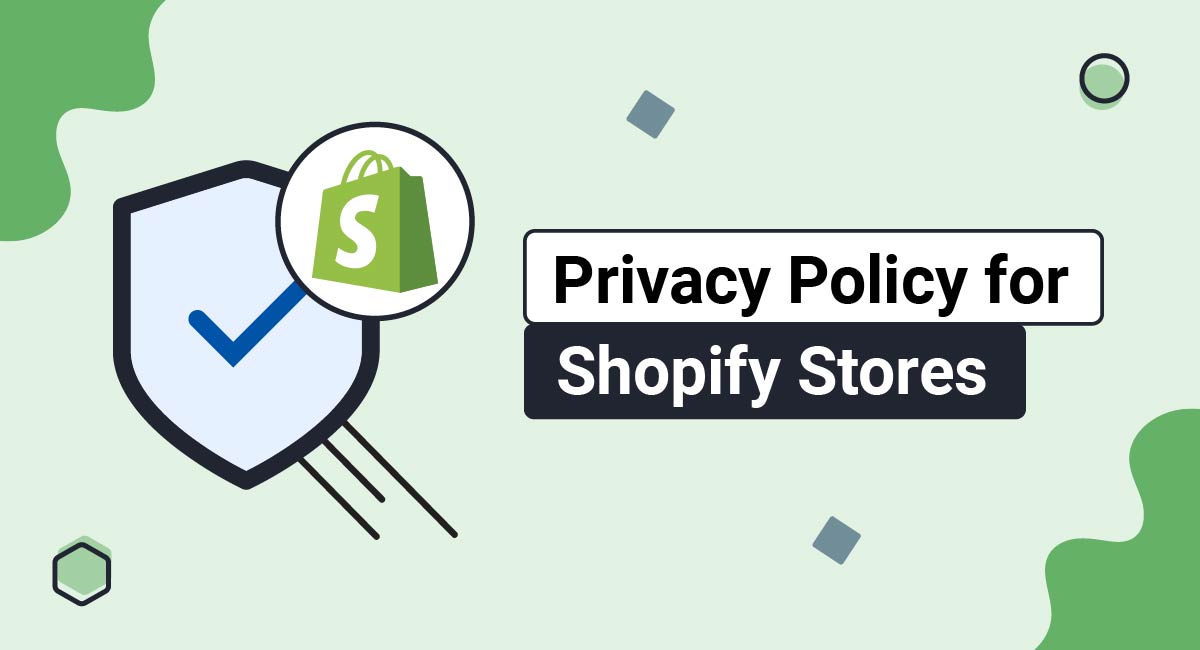 If you run a Shopify store or you're planning to set one up, you need to create a Privacy Policy... 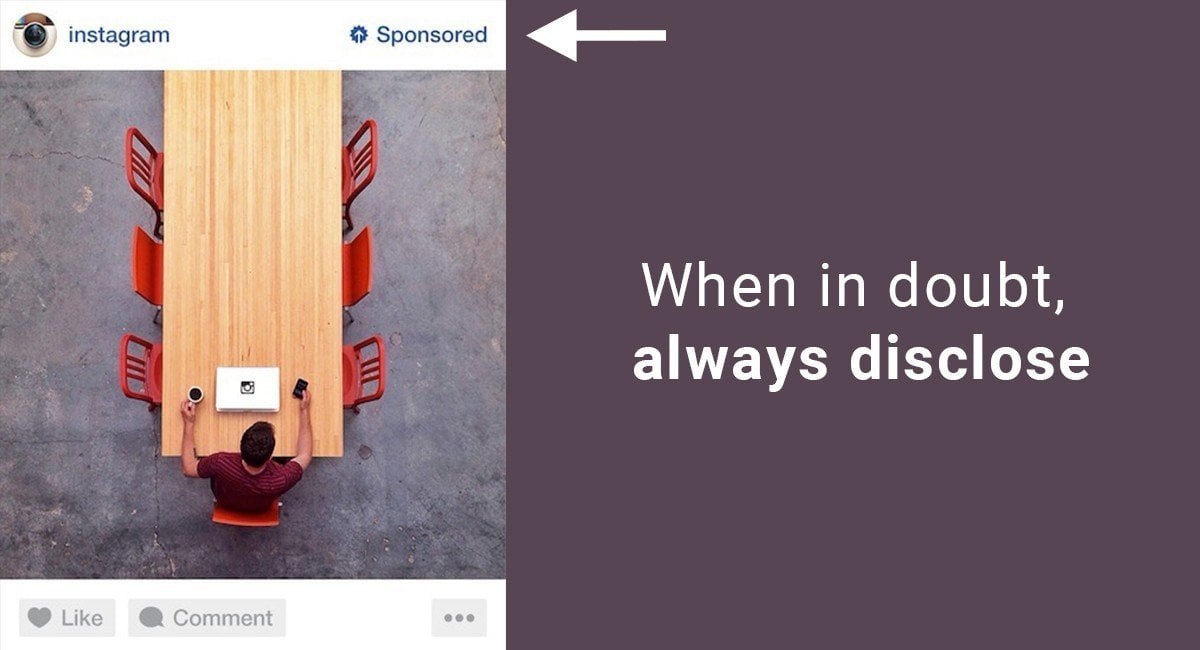 When in doubt, disclose it in your agreement

While an activity or action may not be illegal on its own when it comes to your website or mobile...