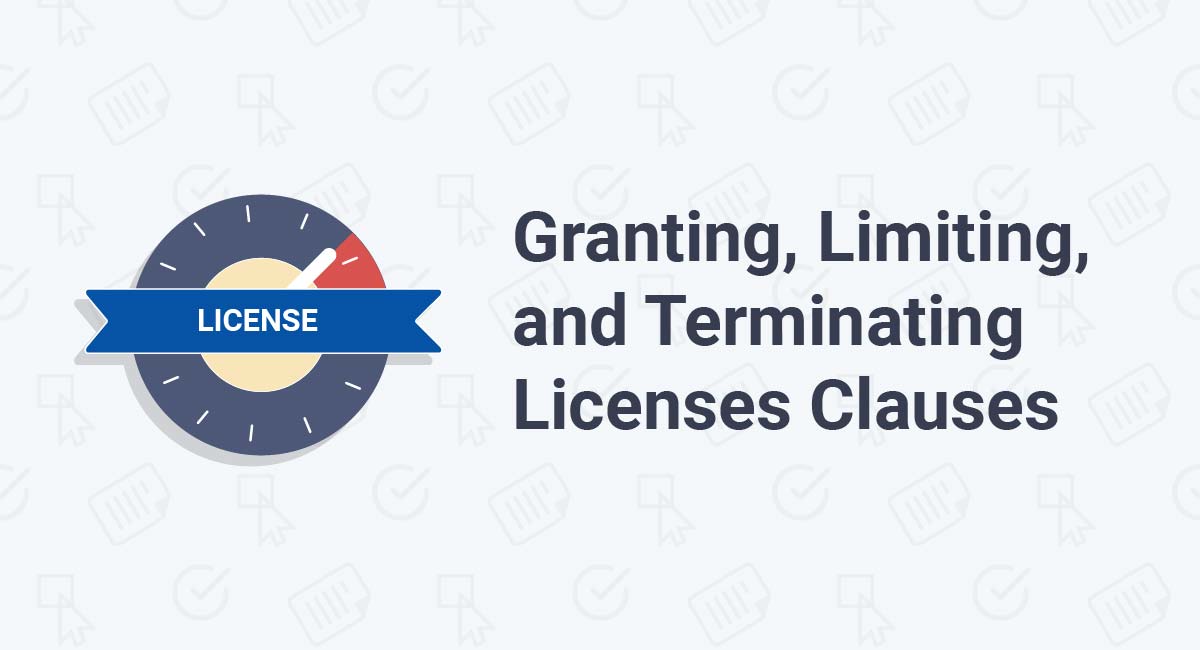 A clause that addresses the granting, limiting, and termination of licenses covers how the license to a product is given, the restrictions on that license, and the conditions and results of terminating the license.

For any business that relies on selling licenses in their primary business model (such as a Software-as-a-Service (SaaS) company), these are at the core of their revenue.

Having good control over who can be granted a license and how they can use it is an essential part of many modern businesses. But often, the trickiest part is in the termination of licenses.

Regardless of the source of the issue, granting, limiting, and terminating licenses can lead to legal disputes between the licensor and licensee. In order to be prepared for those potential issues, it's important to have clear, detailed language outlining each of them.

This type of clause can be split into separate sections or grouped together as one, but the essential function is the same: to make sure you and your licensees know who can access the licensed product or service, what they can do with it, and the conditions and outcomes of ending the license agreement.

Let's take a deeper look at these types of clauses so you can create your own for your legal agreements.

What is a Granting, Limiting, and Terminating Licenses Clause?

A Granting, Limiting, and Terminating Licenses Clause typically shows up in an End-User License Agreement (EULA) between two parties and may be included with a Terms of Use Agreement as well.

It's the mechanism one party uses to give another a license, set limits around how they can use that license, and establish rules about how and why the license can be terminated by either party.

Sometimes, each of those functions is served by separate clauses. You might have a clause on License Granting, another on Restrictions on Use, and one more on License Termination. In other cases, they're all wrapped into one clause with a name like "Term and Termination."

While the length and level of specificity can vary between these, the essential points covered are generally the same.

Why Include a Granting, Limiting, and Terminating Licenses Clause in your EULA?

This clause is the core of any EULA, but can also be an important part of Terms and Conditions agreements. Each part of the clause - granting, limiting, and terminating - has a distinct and valuable purpose for any business that distributes licenses as a part of what it does.

Granting licenses is important for many businesses, especially those that follow a "Software-as-a-Service" (SaaS) business model. For these businesses, the main product sold is an annually renewable license to use a product hosted online. A clause that states that the licenses are granted and how exactly they're granted is the permission that users need to start using the product they've purchased.

Of course, businesses want to put limits on who can use the licenses they sell and how they can use them. They may take the opportunity to enumerate exactly what the licensee gets with their license, or set rules about how the license can be accessed and used.

For example, you might want to make sure that users don't use their license to reverse-engineer your product and sell it to others.

Terminating licenses can often be the most fraught part of an agreement. Licensees are happy to be granted a license and will accept reasonable restrictions, but if a dispute comes to the point where it might be necessary to terminate a license, that can raise emotions on both sides.

That's why it's so important to have a detailed section on terminating the license. The conditions under which a license can be terminated and how termination occurs should be crystal clear to everyone. It will shorten and even prevent any litigation that may result from a dispute rooted in the termination of a license.

What are the Components of a Granting, Limiting, and Terminating Licenses Clause?

Granting, Limiting, and Terminating Licenses are distinct functions that are sometimes split into separate clauses. This will discuss how they're used as a part of both EULAs and Terms of Use Agreements, regardless of whether they're grouped together or split into separate sections.

The section on granting licenses is often the simplest. Often there is general language saying that the licensee has to use the license and product in ways that comply with the rest of the Terms of Use Agreement and any applicable laws.

It will also specify the types of licenses granted, the number of licenses, and the duration of those licenses.

There are different types of licenses that a business can grant:

Specifying the duration of licenses can be a little more complicated. First, you have to set when the timeline begins. Is it when the license is delivered to the client, or when the client activates that license?

You should also specify how the term of a license can be extended or renewed, and whether that will happen automatically.

You can also take the opportunity to set a timeline around when licenses can be canceled, although that's more in the domain of the "Terminating Licenses" section.

In this example from the proProduktmanagement EULA, the licensor is granting non-exclusive, non-transferable, non-sublicensable licenses. The number of licenses isn't specified here, allowing the licensor to use this same agreement for other licensees. The licenses have a 12-month duration and they will be automatically renewed at list price unless they are terminated more than 30 days before they expire:

Limiting Use of Licenses

It can be a much more complicated task to limit how licenses can be used. People are always thinking of new ways to use services in ways that exceed their agreed-upon terms, and licensors like you need to do what you can to keep up with them.

By limiting how your licenses are used, you build guiding walls around licensees that may seek to use your intellectual property in ways you didn't intend.

Probably the most common limit on the use of a license is that only the licensee can have it. That means that you can tell licensees not to give their licenses away to others. It also means you can restrict them from selling, renting, or otherwise providing it to people who might want to use the product. If they want it, they can ask you for the license themselves.

It's also common for companies not to sell to direct competitors. There are plenty of reasons to want this, after all, your service is valuable and you don't want to give your competitors that edge. But it's good to specify some of the ways that competitors might misuse your license as prohibited as well. You can restrict users from doing things like copying your product or service or stop them from reverse engineering it and making a similar product.

Unfortunately, people misusing your product can affect people beyond your own company. For example, users could upload malicious code through a file sharing service, or send it to others via social media. You can include language to explicitly disallow this behavior. Although you might think that's implied or included in other areas of the agreement, this is the kind of thing that's good to make as clear as possible in the case of potential issues later on.

It's also good to specify that you're only applying these restrictions to the extent permitted by law. General phrasing like that makes sure that if the clause ever does need to be applied, you can still apply the legally permitted portions even if some portions aren't enforceable under the current laws and jurisdiction that apply in that case.

A good example of a clause limiting the use of licenses is in Salesloft's Terms of Use. Salesloft includes all of the above sections and a few more, restricting user behaviors against activities that would harm Salesloft and others. Reading through this, you can get a good idea of what you might want to restrict your users from doing with the service or product you provide: 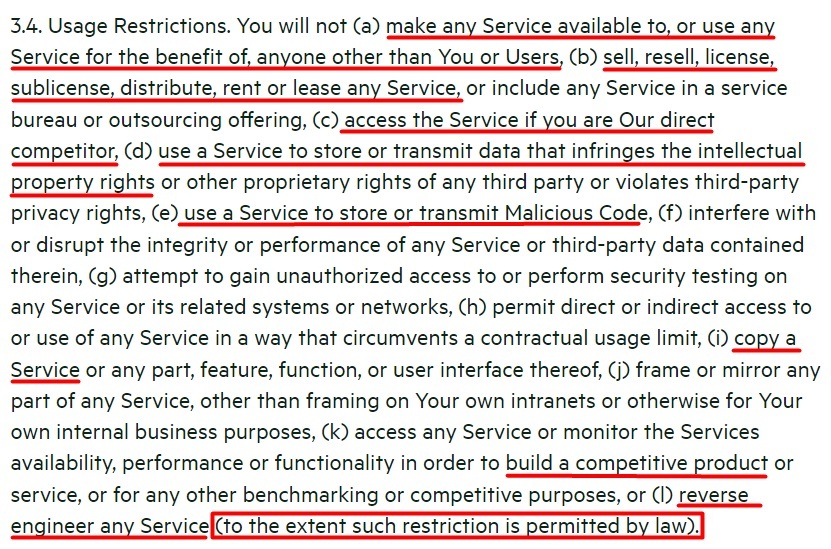 While not everyone has distinct clauses on granting and limiting licenses, it's very common to have a complete section just on terminating them, such is the importance of this material.

It's common to let either party end an agreement if the other party violates that agreement and doesn't remedy their error within a certain time frame (often 30 days). This kind of structure appears fair and reasonable to both parties because it treats both sides equally and allows room for fixing any mistakes.

It's also a good idea to let both parties end the agreement if they both agree to it.

When you consider the impacts of ending the license or agreement, you should think about what the customer is paying for. For example, if they're paying for access to a database, your section on terminating licenses should specify that the former licensee cannot access the account afterwards.

You can also include language requiring former customers to destroy data they downloaded after the agreement is over.

You should also include specific provisions to cover the consequences of each party breaching the agreement. Here, it's common to include a financial impact for the offending party.

For example, you can say that if your customer violates your agreement and you have to terminate it, you will still charge the customer the full amount they originally owed you for an annual subscription, even if you terminate it months before the original date.

In this example from ZoomInfo's License Terms and Conditions, the conditions for and effects of termination follow the above format fairly closely. Each party has 21 days to fix breaches of the agreement before the other can terminate it, which would result in the licensee losing all access to the licensed materials and destroying all copies of those materials. It includes a section specifying that if the licensor is in breach, the licensee is refunded for the remaining portion of the subscription (if it was pre-paid):

Whether they're separate sections or one whole unit, clauses on Granting, Limiting, and Terminating Licenses are among the most important parts of EULAs and Terms and Conditions agreements.

Each has an important role to play for modern businesses, especially those with SaaS models, but the most important part is that the language be clear and the agreement seems fair and reasonable to all involved. 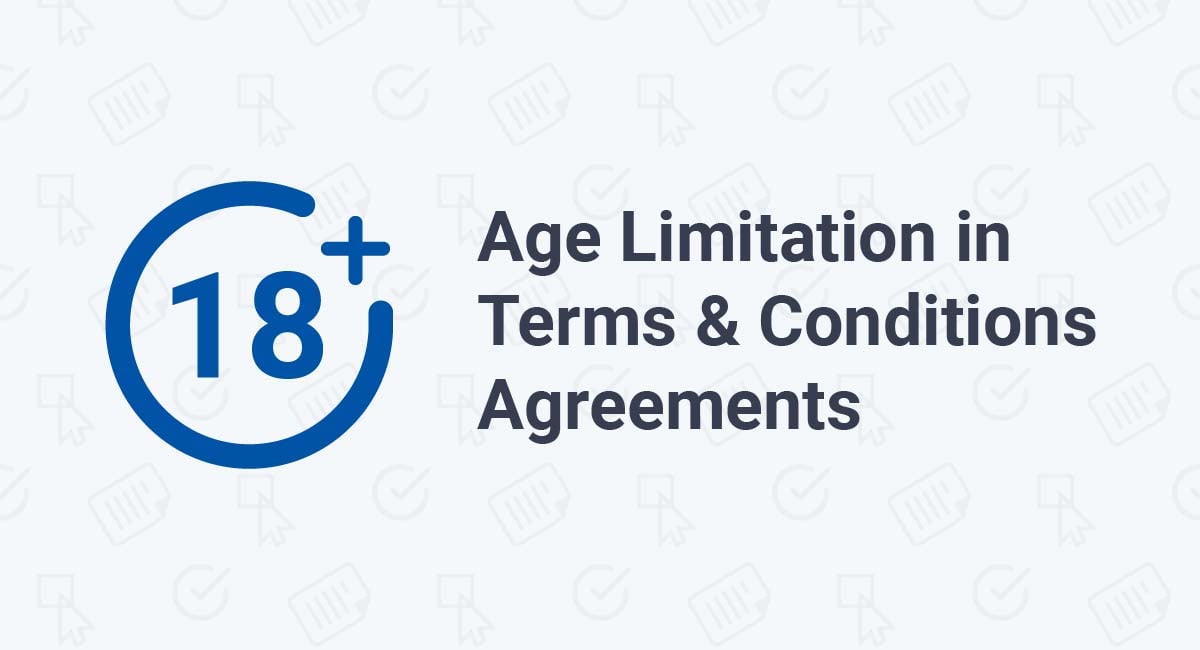 Businesses face a difficult situation with minors using the internet. They want to make their sites accessible to everyone, but... 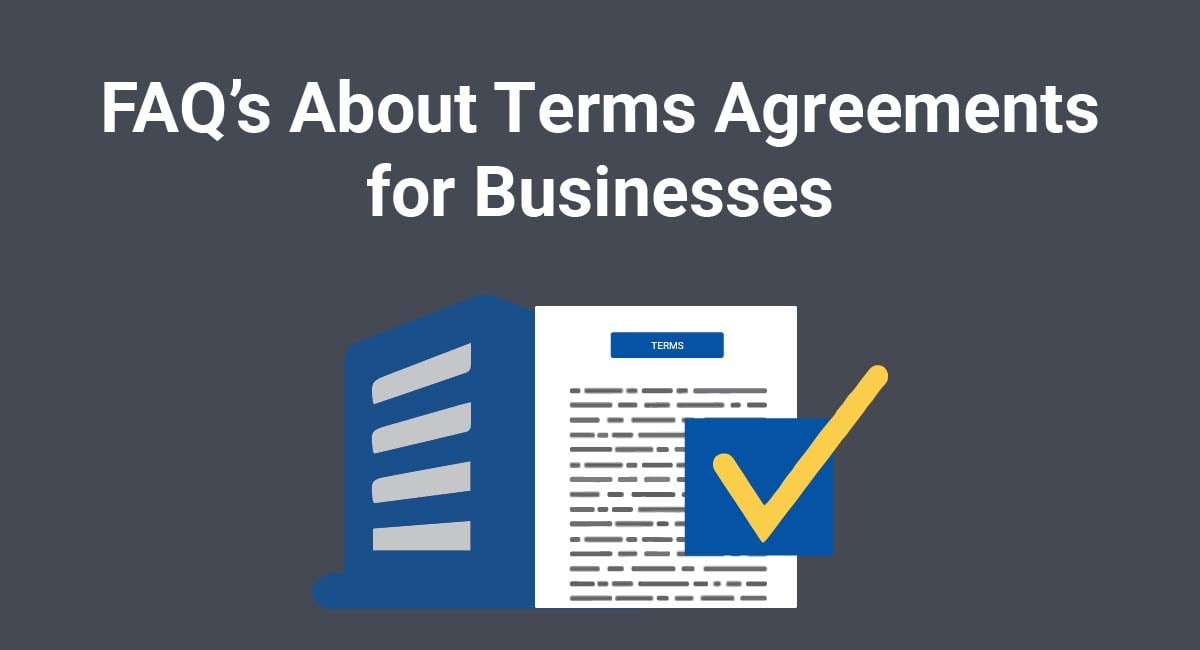 In this article, we'll be looking at some common questions relating to Terms and Conditions agreements for businesses. We'll be... 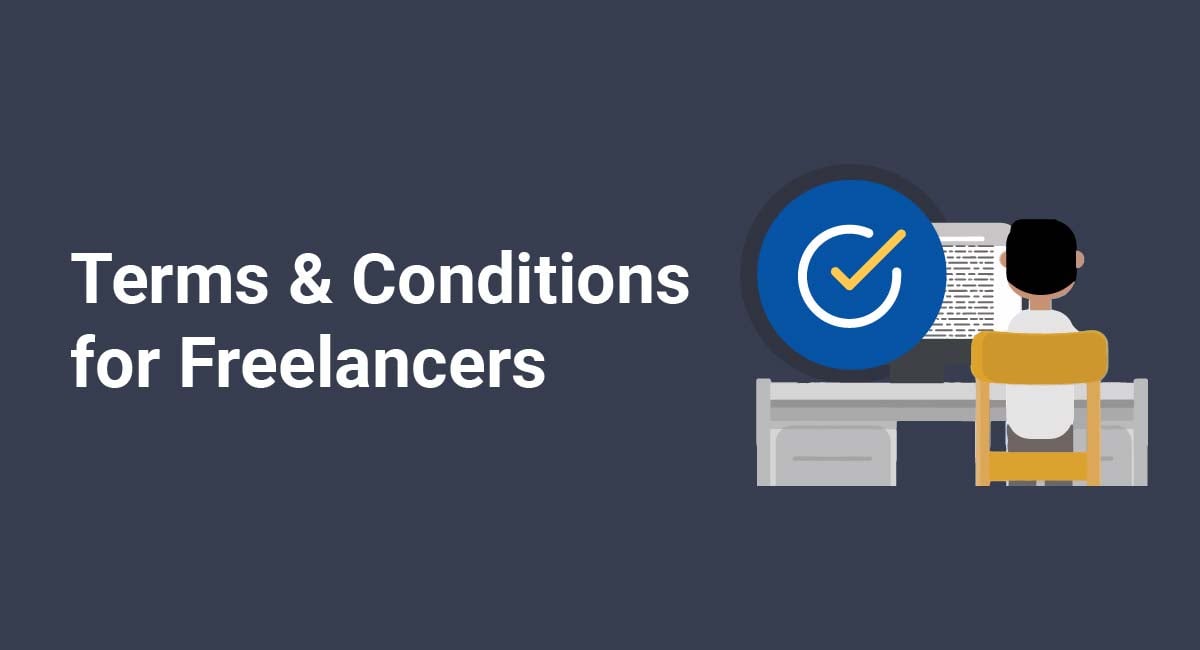 Freelancers all over the world are familiar with the "feast or famine" experience. Whether you're a writer, designer, photographer, or...