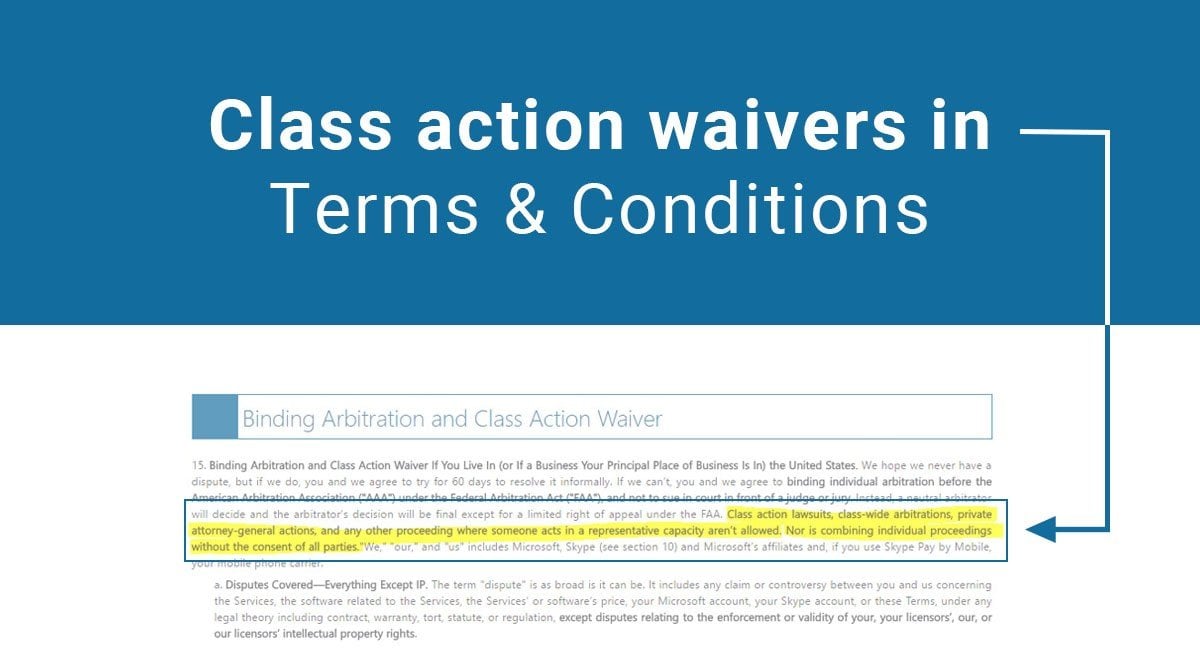 If you're in mobile apps and/or software development, you must consider potential liability.

You will find it difficult to limit consumer claims based on a cause of action and still have those limits remain enforceable.

That is why there's a better alternative.

Class action waivers act to limit the means of dispute resolution or the way grievances are settled. Since class actions can be time consuming and expensive for a company, having users agree to avoid them is a good cost-cutting measure.

Class Action Waivers in Terms and Conditions from termsfeed

What is a class action?

A class action is unique to U.S. law.

It allows an individual to sue on behalf of a larger group called a "class." The individuals involved are called "class members."

There's no required minimum or a maximum number of class members although most actions involve hundreds if not thousands of individuals.

For example, if you have a mobile app that collects private information, you can be vulnerable to a class action lawsuit if there's a security breach in your app. That's because breaches affect a large number of people who all had been using your mobile app.

Class action lawsuits can be brought in state or federal court.

While the state court actions will depend on that state's rules of civil of procedure, they're all very similar to Federal Rule of Civil Procedure 23 which controls class action lawsuits brought in federal court.

Each class has to be certified by the court or approved to move forward as a class action lawsuit. The requirements include:

Class action lawsuits may not remain a risk only in U.S. jurisdictions.

The Consumer Rights Act 2015 allows room for class action-style lawsuits to take place in the U.K. You'll likely need to consider this protection even if you do not distribute apps or software to U.S. consumers.

Why you want a class action waiver

When the court certifies a class action, the intention is to secure damages that will compensate the entire class.

It requires substantial management by all attorneys, whether they represent the plaintiffs or the defendant. Between the work involved and the possibly large monetary settlement, facing a class action lawsuit becomes expensive quickly.

Another expense of these lawsuits is that you normally have to hire a class action specialist to defend you. Not all in-house or outside litigation attorneys are willing to defend class action lawsuits.

The only advantage to class action lawsuits is the fact that it could be easier to defend one large lawsuit instead of several smaller ones. However, the better course of action is to avoid the risk of court appearances completely either by reducing vulnerability to liability or including an arbitration clause.

The class action waiver is what it sounds like: it is a clause in your Terms & Conditions (T&C) agreement that prevents the user from bringing claims by way of a class action lawsuit.

These have very plain language, as the example from the Terms and Conditions of Spotify shows. Basically, any user with a grievance against Spotify can pursue claims against it that do not involve a class action lawsuit:

Spotify takes a simplified approach where it offers the class action waiver along with mandatory arbitration.

In its Terms and Conditions agreement, Microsoft places a prohibition on not only class action lawsuits but any legal action that combines parties under similar claims unless permission is secured first.

Microsoft's agreement then goes into detail on the allowed dispute resolution techniques and any limits that can apply to them: 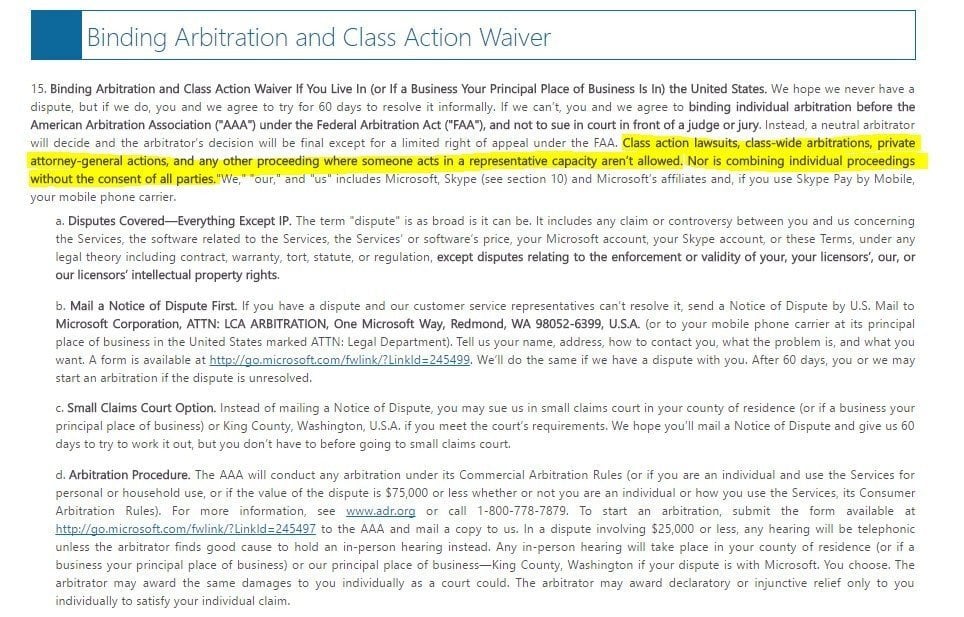 In addition to containing the waiver, companies will often place a heads-up at the beginning of the Terms & Conditions agreement indicating its presence and where it's located in the agreement.

As does Electronic Arts (EA), another large software company.

Spotify goes beyond giving a section number and gives the user a clink straight to the class action waiver:

It is unlikely that every user will read through your Terms and Conditions agreement to find the class action waiver.

For that reason, adopting the approach of Microsoft or EA to indicate that one exists and where it can be found is a prudent approach that prevents users from saying they never saw it.

Also, depending on your risk of liability, you may wish to include not only an arbitration clause but any specific rules describing how a user can file for relief.

A mobile app that handles personal information will face more vulnerability than a one-player game so it'll likely have more controls on dispute resolution.

Basically, the most potential liability, the visibility you'll want for your class action waiver and arbitration terms in your Terms and Conditions agreement.

None of this has any meaning unless the user agrees to the terms.

Since accepting the Terms and Conditions agreement through clickwrap is inevitable if anyone wishes to use your software, that can also the best location for placing the class action waiver.

Reviewing agreements of other companies, this is standard practice. Attempting to place a class action waiver in a separate agreement regarding legal remedies can risk vulnerability.

With the browsewrap, the Terms and Conditions agreement (including all its clauses) is merely accessible in case someone wishes to review it.

Clickwrap is your best option if your legal agreement contains a class action waiver. Since a user must indicate "I agree with the terms and conditions" before proceeding with the download or the use of your mobile app (or even website or specific sections of a website), that assumes consent with all provisions, including the class action waiver.

Therefore, if you place any limits on dispute resolution, including a class action waiver, using clickwrap is more advisable.

The heads-up provisions described earlier can also assist with securing consent from users on the waiver. By placing a reference to these limits early in the agreement and making it easy to read, it makes the assumption of consent that much easier.

If a user bypasses the reference to section numbers or the links provided to a developer, it may be a lack of consideration but also consent to those terms.

However, despite differences in the wording and roles of class action waivers and arbitration clauses, some businesses confuse them.

When this occurs, you risk assuming that one of this type of clause is essential while the other clause is not necessary.

These two clauses are very different from one another.

An arbitration clause requires that the parties to the Terms and Conditions will settle arguments through arbitration rather than going to court.

Parties will then present their claims to a qualified arbitrator who's usually a very experienced attorney or industry expert rather than a judge. Terms of the legal agreement indicate whether this is a binding arbitration, where the decision of the arbitrator is final or a non-binding one where the decision can be appealed to the court.

There's no reference to class action lawsuits in the arbitration provisions.

Class action waivers are necessary because arbitration clauses are not enforceable in all states.

In California, arbitration clauses can be disregarded if there's a third party affected by the transgression. Using our privacy breach in the mobile app example again, the disclosure of personal information may leave another household member vulnerable. Since this party did not agree to the Terms and Conditions agreement, they can still pursue you for damages in a courtroom setting.

It will apply to most U.S. states and internationally, but a resident of New York could still sue you in state and federal court despite that clause.

That is why including the class action waiver along with any arbitration clauses becomes crucial.

Even if you cannot prevent a courtroom lawsuit entirely, you can at least control the likelihood of large expensive class action lawsuits.

When considering including class action waivers in your Terms and Conditions agreement, you'll benefit well from the following:

Limiting ways to settle disputes can prove to be a good cost-saving measure. Add details as it pertains to potential liability and keep to the best practices above.

This way, your focus can remain on app or software development rather than answer several types of legal procedures.