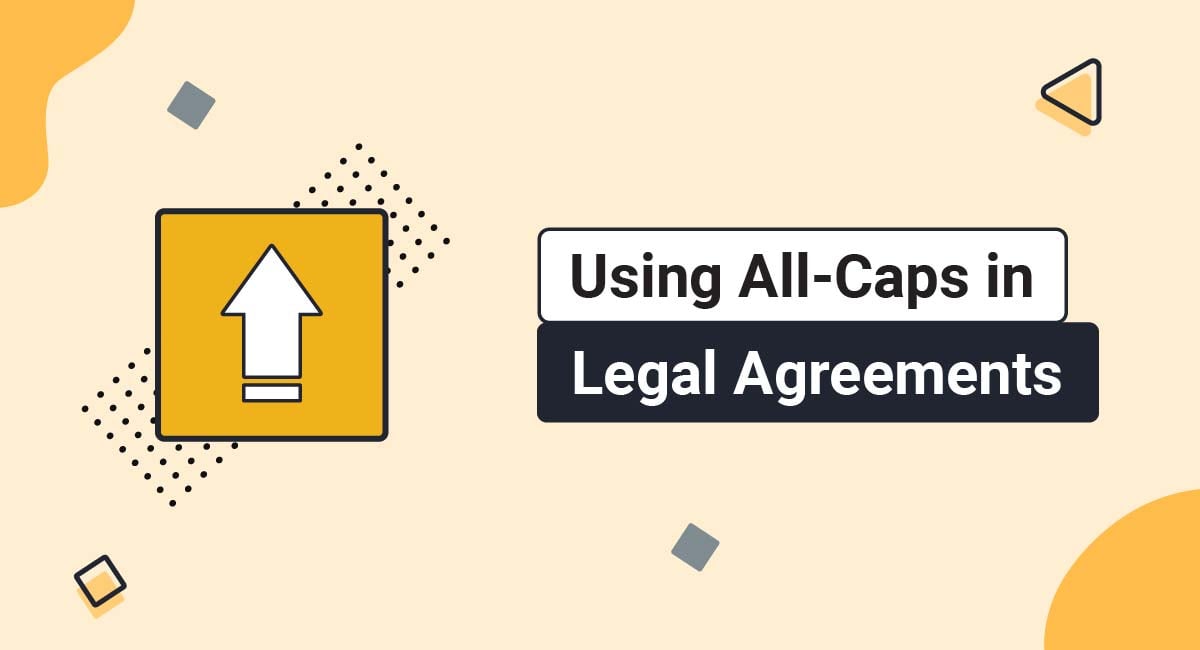 The use of all capital letters (All-Caps) in legal agreements is a time-honored tradition that extends into the digital age. Once it became accepted as a means to make important contract language conspicuous, it became commonplace and is still heavily used today.

This article will show you how to use All-Caps in your legal agreements and offer other drafting tips for making your terms conspicuous.

The use of All-Caps in contracts arises from legal interpretation, typesetting abilities, and tradition. Even though some of the circumstances that made it necessary no longer exist today, All-Caps continues to prevail because it draws attention to important legal clauses.

During the 20th century, the United States looked to promote uniform laws. National bar associations pursued this goal by publishing books of suggested laws. These were referred to as uniform codes and one of them was the Uniform Commercial Code or UCC.

The UCC was first published in 1952 with updates following every five to 10 years. It continues to be updated today with the latest update issued in 2012. The code is considered a standard for state laws addressing commercial transactions, including their contracts.

When states started passing their own versions of the UCC, court cases regarding contract interpretation became common. One issue included conspicuous contract language.

In its definition section, the UCC defines conspicuous as follows:

The sub (A) in this definition was taken literally. Attorneys argued and courts agreed that using All-Caps on important provisions made it conspicuous. It became common practice to draft important contract provisions in All-Caps to meet this standard.

The preference to All-Caps also had a technical reason. In 1952, document formating was limited and word processing technology changed little until the mid-1980's. Not only was All-Caps specifically mentioned by the UCC but it was actually the easiest way to make provisions conspicuous.

IBM Selectric typewriters increased productivity but their abilities were limited. While some models had the ability to underline, using All-Caps was an easier way to present contract provisions. All-Caps involved less labor and did not reduce typing speed as much as the several steps required for other formatting options.

Options expanded since the introduction of word processing and HTML. In addition to All-Caps, there is now bold, italic, and color font available in any word processing platform. While All-Caps remains a standby for specific provisions, it is not uncommon to see developers draft agreements using other ways to emphasize language.

Even with options, All-Caps is likely here to stay. It is easier to stick with previous formats when updating agreements. However, since the UCC, contract law, and privacy regulations only emphasize conspicuous language, there are deviations from this tradition.

Despite this being an important online agreement, it is uncommon to see any provisions in All-Caps. When it does happen, it is done for emphasis. The language that gets emphasized depends on the preferences of developers.

Here's an example of how you can use All-Caps to get an important point across in a Privacy Policy:

You may have similar preferences, especially if you run a website or app that handles especially sensitive personal information. However, rest assured that this is only a preference and not a requirement.

All-Caps arises frequently in Terms & Conditions agreements, which may also be called Terms of Use or Terms of Service. You'll find this most commonly with limitation of liability and warranty disclaimer clauses, although other terms may use it as well.

The Canadian Association of Public Schools--International uses All-Caps to remind users to read the T&C. All-Caps and bolded text draw attention to this:

Pandora lists allowable uses in its T&C but places this statement in All-Caps:

The same practice is also an option with your T&C.

Limitation of Liability and Warranty Disclaimers

Business owners and developers add limitation of liability and warranty disclaimer language because the online world is full of uncertainty. Without these clauses, they risk having to pay damages to users if their systems shut down, functions fail or other users misuse the website or app in a way that affects others. Putting these clauses in All-Caps helps ensure they are noticed by readers.

The general limitation of liability provision is frequently presented in All-Caps. It addresses cases of system failure and other circumstance beyond a developer's or website owner's control.

The Guardian has this provision in its T&C and keeps it in All-Caps: 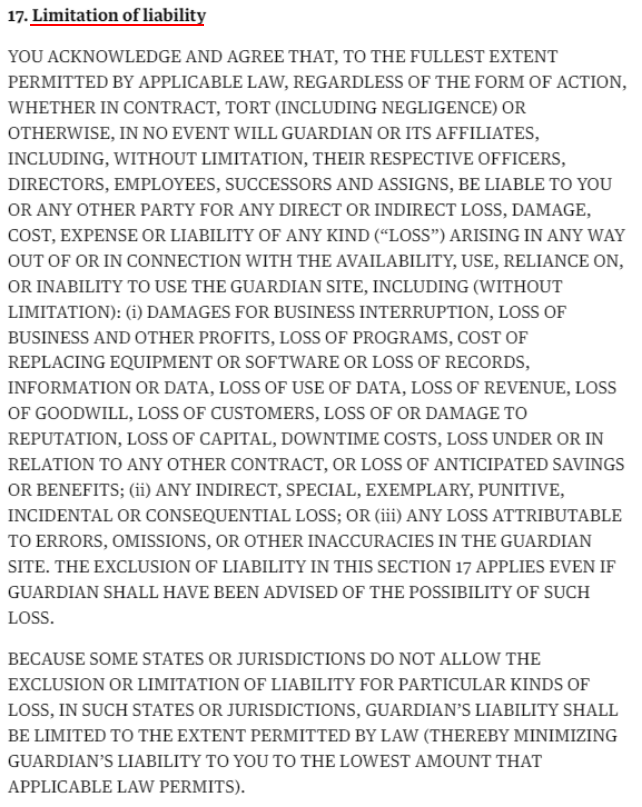 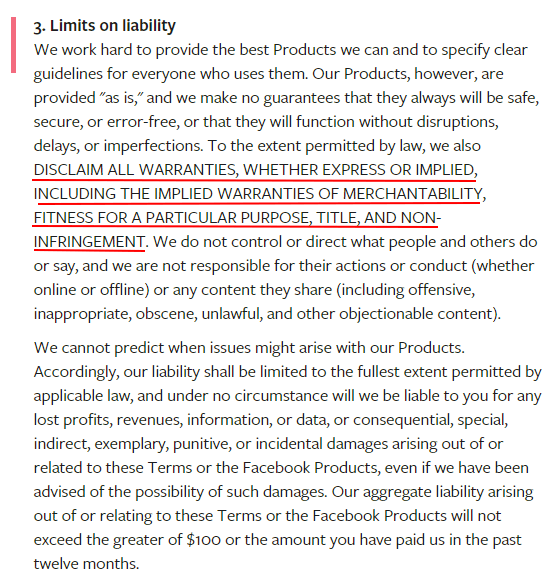 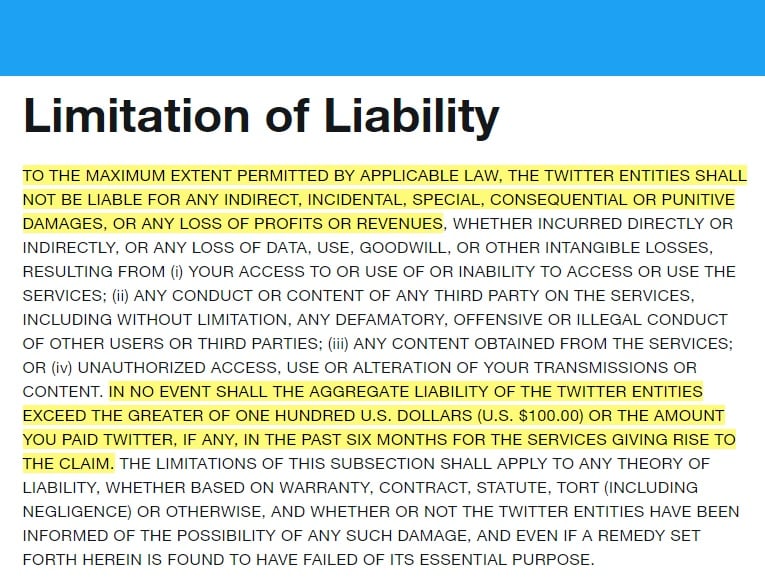 The same is true with its warranty disclaimer, although like Facebook, it only uses All-Caps for the disclaimer language: 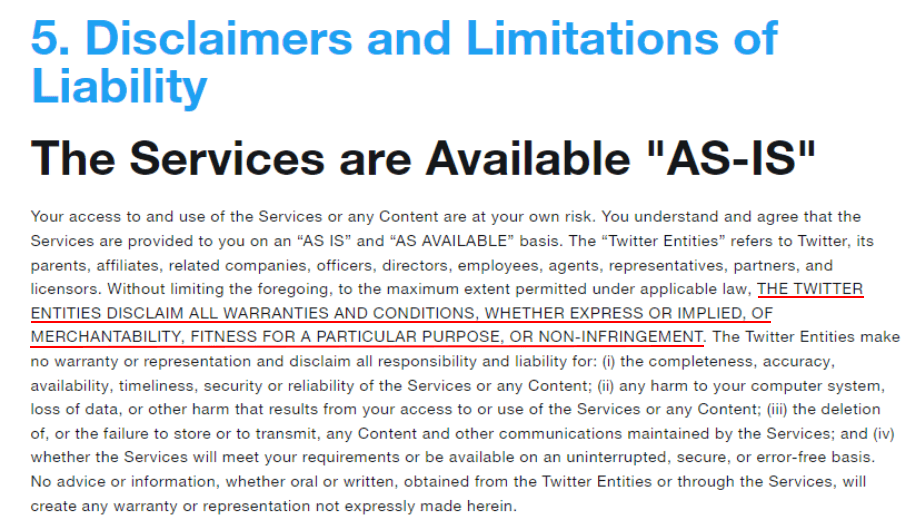 Since limitations of liability and warranty disclaimers limit user rights and can result in liability if they are not conspicuous, All-Caps is the prudent choice. Users are used to important language being capitalized and businesses do it because it works for communication and holds up against legal challenges.

All-Caps language appears in EULAs for the same reason as in Terms and Conditions agreement. Like the T&C, it reflects developer preference and a desire to avoid liability, while drawing attention to key clauses in the agreement.

Introducing the purpose of the EULA is something that is common to see done in All-Caps. This makes it clear that the document is important and that it will affect the consumer.

Here's how TeamViewer does this at the beginning of its EULA, calling users to please read the agreement carefully: 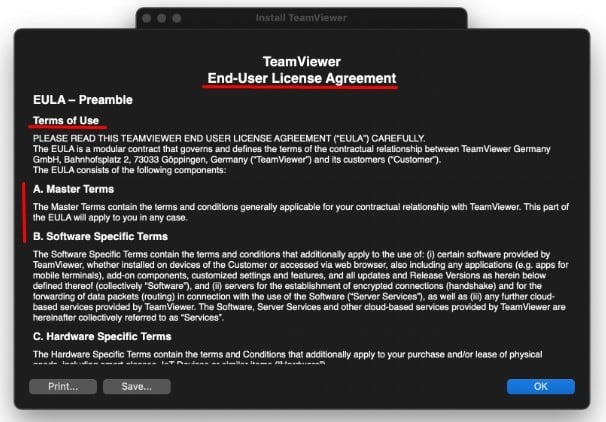 Pro Power Clean does this similarly to help show importance and draw the reader's attention to the agreement: 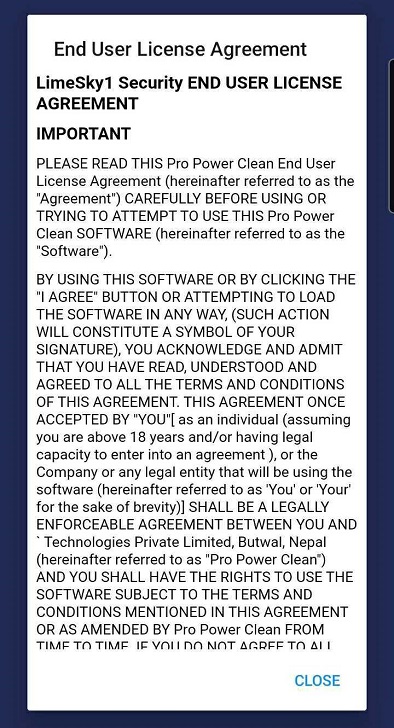 It is likely you will also have similar preferences for All-Caps. However, many developers reserve it for protecting themselves from liability.

Limitations of Liability and Warranty Disclaimers

Nest uses normal lettering to introduce its Limitation of Liability clause, but it then adds more detailed, strong language in All-Caps to make it conspicuous, clear and authoritative: 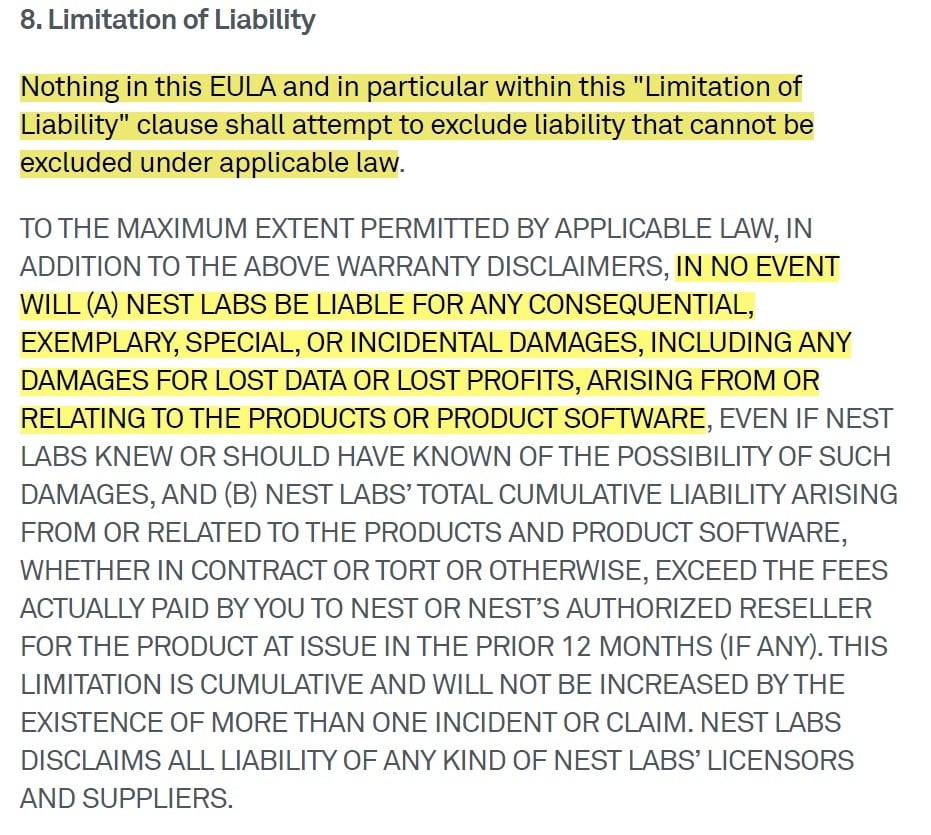 When an EULA is involved it is because users download the software to their devices. That creates greater reliance on its functions which requires heightened liability protection. If you have an EULA instead of a T&C, feel free to use All-Caps liberally when discussing liability and warranty limitations.

While All-Caps are standard, there are other ways companies make their agreements more conspicuous such as by using different font colors, headings and summary notes. This is becoming more common as most online agreements are made to be read online rather than printed.

This is a welcomed development since in many cases language is easier to locate and some developers add summary statements to help users understand. It makes it much more difficult for users to question whether language is conspicuous.

Here's an example of how you can use different colored fonts, the use of bold headings, and a quick summary note so a user can find this section quickly:

And here's a way to use blocks of color to make a standard paragraph stand out and look more visually appealing: 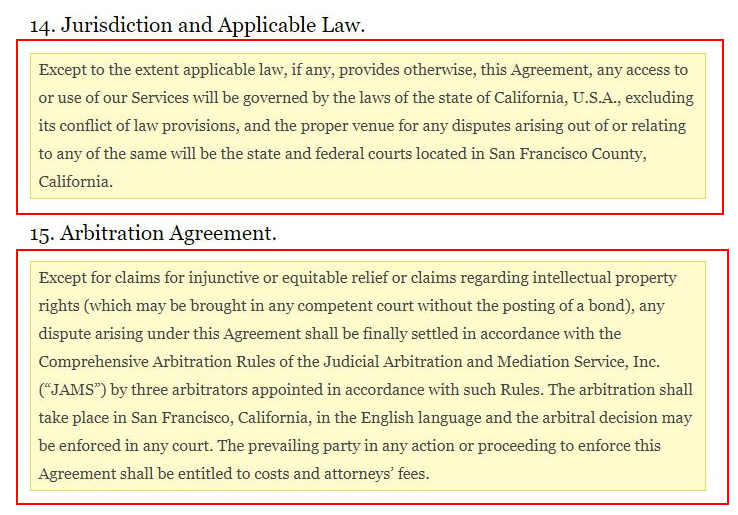 Sometimes, a developer opts for the simple approach. Pandora does not use color or All-Caps in its Privacy Policy, but it emphasizes important sections in bold. This is also very noticeable to users: 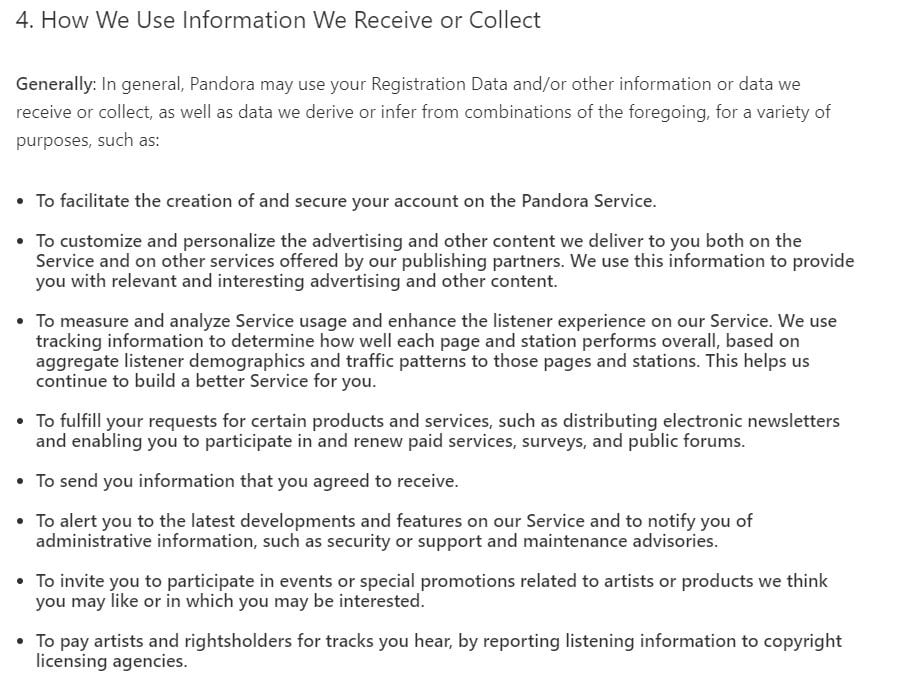 While All-Caps is a traditional way of emphasizing conspicuous language and continues today through habit and easier updating, you still have options.

You can utilize this method whether you are drafting a fresh agreement or changing/updating an existing one. It's great to use whenever you have provisions that you want to have stand out. Colored fonts and highlighting are effective, but if you wish to rely on a old standby, All-Caps remains a viable, popular and effective option. 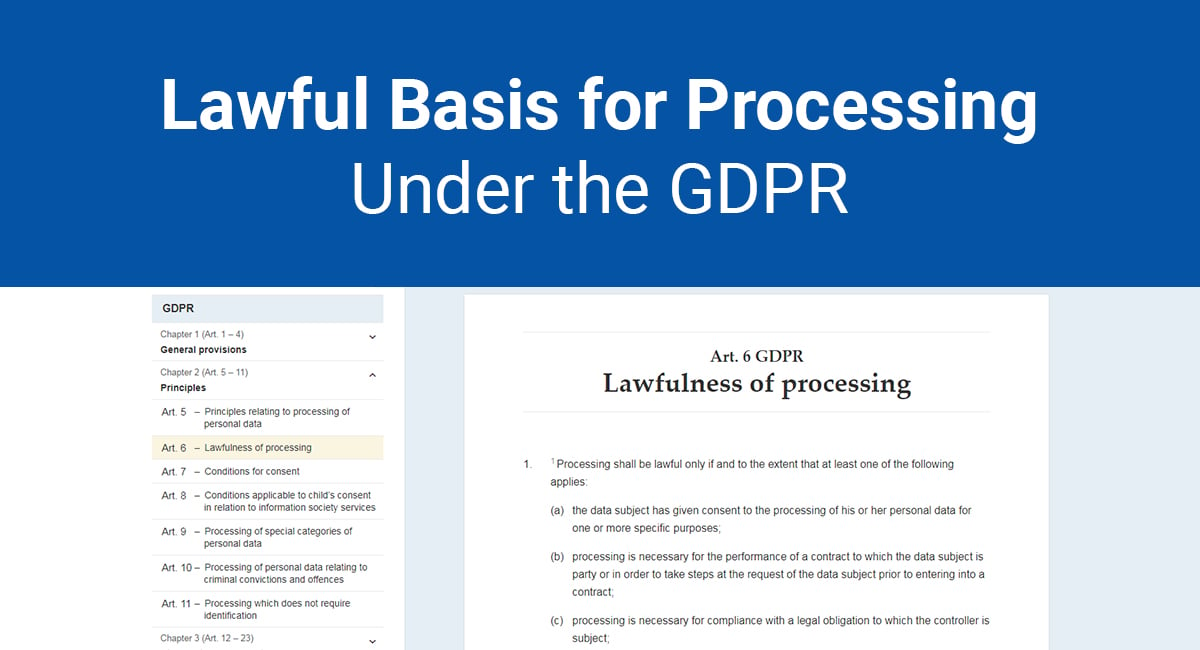 Lawful Basis for Processing Under the GDPR

Gone are the days where massive swathes of information could be collected, shared, and used for any numbers of reasons. The GDPR goes into great detail about when and how personal information can be collected and processed. It also defines what a lawful basis is for collecting and processing personal data.... 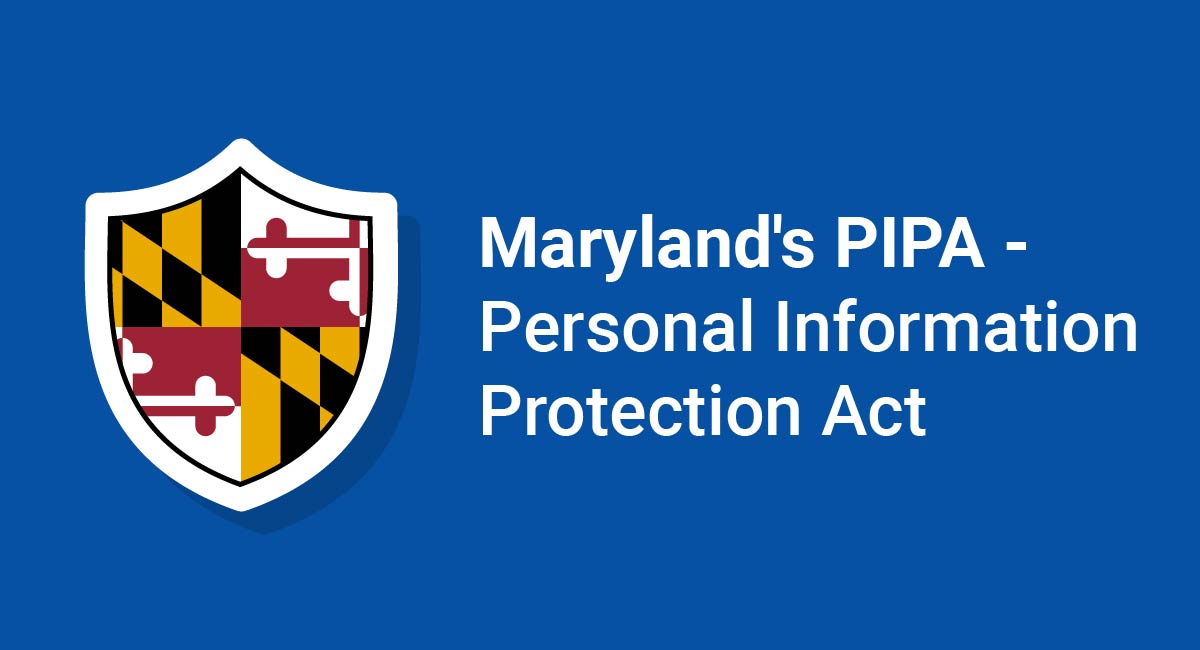 Maryland's Personal Information Protection Act ("PIPA") is a privacy law that became effective on January 1, 2008. It's also known as Maryland's Data Breach Notification Law. Since 2008, a series of amendments were passed that revised and enhanced the definitions of private information to include biometric data. Maryland's privacy laws are... 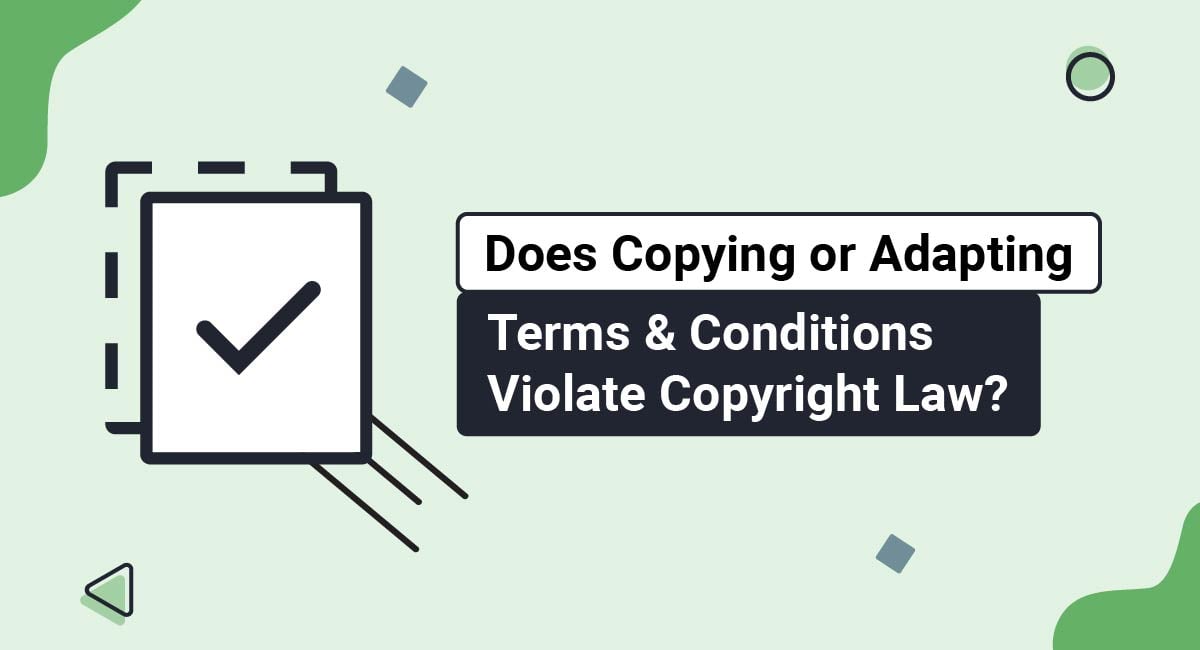 Directly copying a Terms & Conditions agreement (T&C) exposes your company to legal risks in a few ways. First, copying an agreement word-for-word is likely a violation of copyright law. Secondly, even if you borrow an agreement from a competitor in your industry, it is likely that differences in location,...